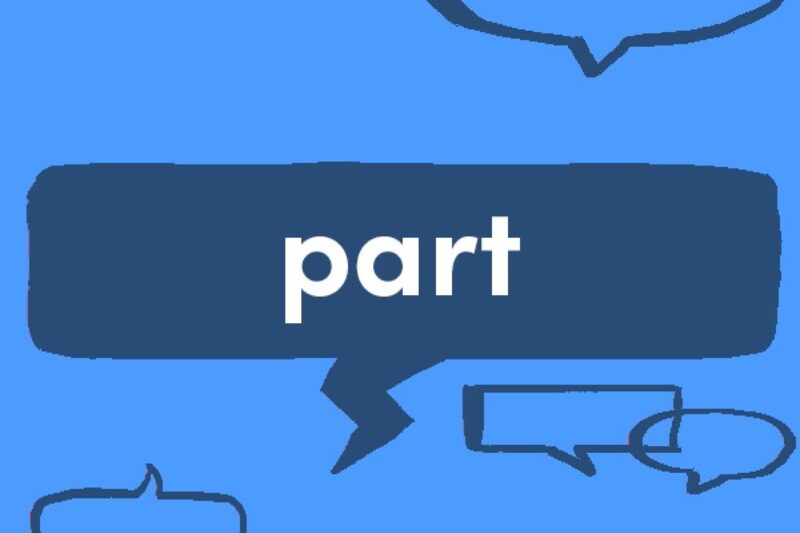 French word of the week: part

This week on our French word of the week blog, we’re going to look at part.

Part is a feminine noun in French. To hear how to pronounce it, listen to the audio here:

It might not sound the same, but you will see that it has the exact same spelling as the English word ‘part.’ As a French learner, you might feel the need to be wary of potential mistranslation here… But in this case you’re lucky, as it pretty much means the same as in English.

The main translations of this noun are share, part, piece, or portion. You might also see the plural form of the word, which has an -s on the end to make parts.

We’ll look at a few examples of French phrases and sentences using part:

pour ma part as for me; on my part

Qui voudrait la dernière part du gâteau ? Who would like the last piece of cake?

Je vais commander l’addition – je veux payer ma part. I’m going to ask for the bill – I want to pay my own share.

You’ll also notice it appearing in French set phrases where the English translation doesn’t necessarily include the word ‘part’:

de toute part or de toutes parts in any case

Now, it wouldn’t be a French word of the week without having something a little bit confusing about it! You might see this word in a sentence where it doesn’t seem to relate to a share or a part of something:

On part pour l’Australie demain. (Talking about a piece of Australia tomorrow…?)

As you’ve probably gathered, the word part in these cases is not a noun. It’s the present tense, 3rd person singular form of the verb partir, meaning to leave. So the correct translations of these sentences are:

Thank you for taking part in learning about another word of the week, we’ll see you again soon.