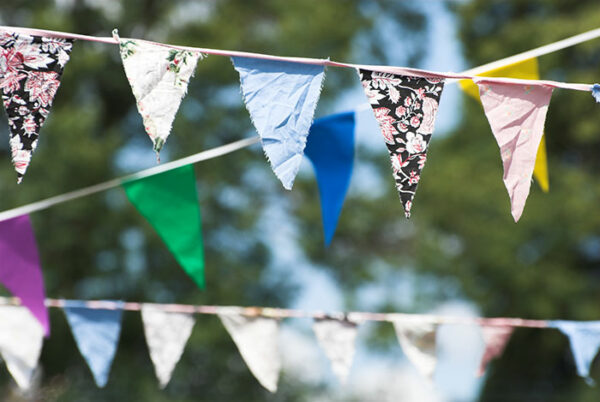 When we try to picture a ‘great British summer’, what comes to mind: coloured beach huts, 99 ice cream cones, and sunny garden parties, or crowds of optimistic families sitting underneath umbrellas on their deck chairs?

Although we may sometimes get caught out, living in a country with such limited sun has meant that we Brits have learnt to make the most of what few balmy summer days we have. One tradition that will never be rained off is the summer fête – enjoyed in countryside villages and even in cities across England in particular every year.

The word ‘fête’ came to Middle English via Middle French, originally meaning ‘feast’, and in England ‘fête’ is now another word for ‘fair’. English fairs developed in the Middle Ages as temporary markets to which British and even international wholesale traders would travel to ensure that they could meet other traders and sell their wares. These fairs were usually linked to a religious occasion, such as the feast days of certain patron saints, and therefore continued annually on this day until the time of the War of the Roses.

Many traditions that have survived throughout the ages may now seem a little odd to first-time fête goers, so read on for your ‘English fête cheat sheet’ and be ready to play tug of war and spin the tombola as soon as you arrive!

1. Tug of War
Originally a royal sport played in Ancient Greece, India, and China mimicking the sun and moon’s fight over light and darkness, this game is now played by adults and children alike. Two teams grab each end of a heavy piece of rope in an attempt to pull their opposition over the centre line. Beware: serious ‘tuggers’ should chalk dust their hands before the cries of “Heave! Heave! Heave!” begin, as rope burns – as well as grazed knees and grass stains – are a hazard.

2. Cream Tea
Cream Tea is certainly not limited to fêtes, but is an English summer necessity. Taken with a pot of tea, the afternoon bite usually consists of two scones with cream and jam, and perhaps a few cucumber sandwiches (crusts removed of course) too. Tea is taken differently in certain parts of the country: spread your scone with jam before covering with a dollop of cream for a ‘Cornish split’ as in Cornwall, or coat with cream before adding jam for the Devonshire alternative.

3. Raffle
Purchase a numbered ticket to win a prize! Usually the winning tickets are stamped with numbers ending in a 5 or 0, and at country fêtes the prizes are often locally made jams and juices if you’re lucky, or knitted animals and questionable bottles of wine if you’re not. Sometimes tickets can be obtained by spinning the ‘tombola’. This is a barrel-like replacement for a sorting hat, and tickets are grabbed from an opening in the top which is invariably too small for most human hands.

4. Wacky Races
Encouraging the camaraderie of the traditional fête are the three-legged race, the egg-and-spoon race, and the sack race. All are suitable for any age and are equally dangerous, hilarious, and humiliating. The three-legged race sees teams of two tie one player’s right to the other’s left leg and attempt to run on ‘three legs’ to the end of a track (tip: if you’re a first-time three-legged-racer, be sure to pick a teammate of the same height as you). The egg-and-spoon race sees players race whilst holding a hardboiled egg on a spoon – resulting in the most absurd running stance possible – and the sack race has each player attempt to run or jump their way to the finish line whilst inside a burlap sack!

5. The Coconut Shy
Be called over by the ‘barker’ and win yourself a coconut by knocking it off its stand with a heavy wooden ball!

6. Foodie Competitions
Summer fêtes will often include either a ‘best Victoria sponge cake’ competition or a ‘grow the largest vegetable’ competition. Victoria sponges must be moist, made with butter and definitely not oil or margarine, must be filled only with homemade jam, and are usually decorated with icing sugar sprinkled through a doily for a chintzy stencil effect. Giant vegetables, meanwhile, must be grown organically by the entrant and ‘varnishing’ of veggies for extra shine is strictly forbidden.

7. Morris Dancing
This English folk dance dates back to 1448, and today men and women still wear the traditional bell pads on their knees or ankles and dance a rhythmic step accompanied by the waving of handkerchiefs, clacking of sticks, or even crossing of swords! If you’re very lucky, you may even witness a Morris ‘dance off’ whereby dancing groups from neighbouring villages, usually with differing styles and uniforms, try to outdo one another.

8. Crockery Smash
A rare opportunity for children to fling heavy balls at stands of crockery for no reason whatsoever!

9. Hoopla
Attempt to throw a wooden ring so that it lands around one of a set of blocks to win a prize! At less friendly fairs, the game may be set up so that your rings cannot fit around the blocks whilst the stall worker uses his ‘coping’ ring (seemingly a replica of yours) to demonstrate how the game works – although luckily conmen are not a common characteristic of country fêtes.

10. Wet Sponge Throwing
This is perhaps the only occasion on which a medieval punishment tool is put to use in modern England. Although we often refer to these wooden boards between which willing participants place their hands and neck as the ‘stocks’, we actually use the ‘pillory’, as the stocks are made to hold the ankles. Nowadays, the sufferer of the pillory usually has wet soapy sponges thrown at him by children with bad aim; however in medieval times the punishment was markedly worse – victims being locked in for several days and often dying of hypothermia or heat exhaustion.

11. Welly Wanging
A sport which requires participants to fling a wellington boot as far as possible, and which now has its own World Championship!

As most English countryside villages are deep in mud for 70% of the year, it’s no wonder that this piece of essential footwear has grown its own tradition. Legend has it that the game originates from the village of Upperthong in Holmfirth, where one evening an argument in the local pub ended in one party taking off his welly and wanging (throwing) it at the other as he chased him outside. The boot flew so far and the scene was so comical that villagers proceeded to re-enact the scene over the coming weeks, until it eventually became a friendly game.

Techniques include one handed, two handed, between the legs, and the backward throw. Right or left boots may be used, distance must be measured in the old Imperial units, a run-up of 42 paces is allowed, and wellies are to be rubber, size 9.

With all of this, you should now be ready to hold your own country fête!