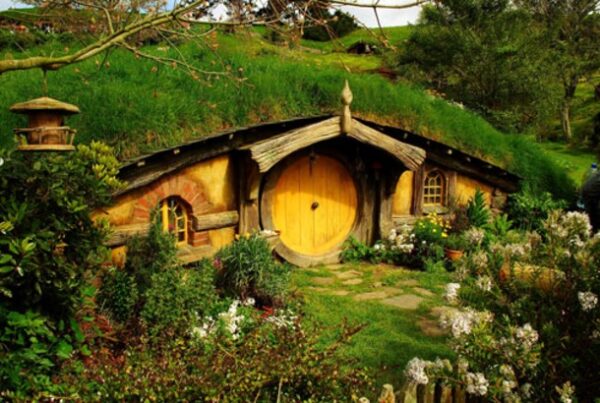 80 years of The Hobbit: The unique language of J.R.R. Tolkien

In honour of The Hobbit’s 80th anniversary, we explore the origins of some of the legendary words and phrases J.R.R. Tolkien coined, within his own novels and during his time as a dictionary editor.

Perhaps his most famous linguistic invention, the word became well-known in 1937 after publication. Tolkien described the origin of the word as a spontaneous flash of inspiration which came to him whilst grading exam papers. On a blank leaf of paper he scribbled the opening line of the book: ‘In a hole in the ground there lived a hobbit.’

He etymologised the word as a modern form of the old English ‘holbytla’, or hole-builder. Many years later, in 1986, hobbit entered the Collins English Dictionary defined as ‘one of an imaginary race of half-size people living in holes’.

Further to the original definition, a second meaning was added in 2005: “a nickname used for a very small type of primitive human, Homo floresiensis, following the discovery of remains of eight such humans on the Island of Flores, Indonesia, in 2003”.

Have you even experience a ‘eucatastrophe’? We promise it’s not a typo. A eucatastrophe is an entirely unique Tolkien invention, used to describe ‘a sudden and favourable resolution of events in a story; a happy ending.’

In a letter written in 1944, he wrote: ‘I coined the word eucatastrophe: the sudden happy turn in a story which pierces you with a joy that brings tears.’ The eu- which prefixes the word is likely to derive from the Greek εὐ- meaning ‘good, well’.

If you’re a Game of Thrones fan, this word might seem familiar. In Westeros, a warg has the ability to enter the mind of others, perceiving the world through their senses and controlling their actions. But did you know Tolkien modernised the word?

Warg finds its roots in Norse mythology with the word ‘vargr’, meaning wolf. Tolkien is believed to have invented warg using the Norse word ‘vargr’ and the Old English ‘wearg’, meaning a criminal or a felon, whose roots are linked to the modern English word for enemy.

Speaking of orcs, this word is another of Tolkien’s heinous fantasy villains. It might be apt to point out that the first definition in the Collins Dictionary for orc is ‘any of various whales, such as the killer and grampus’, deriving from the Latin orca.

Tolkien popularised the word, which derives from the Italian ‘orco’ (man-eating giant) and has only been in occasional use since the 16th century, by reinventing it as a race of evil minions serving darker forces. Tolkien himself wrote in a 1954 letter that the word derived from Old English ‘orc’, meaning demon, because of its phonetic suitability.

There’s a strong chance the word is also rooted in the Latin Orcus, identified with the god of the underworld Pluto, and interestingly also the source of ‘ogre’.

Ever heard of a tween? You can thank Tolkien for that. Generally used to describe children between the ages of about 10 and 12, before they become full blown teenagers. Prior to Tolkien adopting the word, ‘tween was used as a contraction of between.

Tolkien infused it with a different meaning in The Fellowship Of The Ring, where he described a tween as a hobbit between the ages of 20 and 33, when they officially come of age. The tween age is considered to be troublesome for Hobbits, and the word is a blend of ‘teen’ and ‘twenty’.

The success of the fantasy genre rests heavily on the author’s ability to conjure up breathtaking worlds, and Tolkien is the master. In addition to his exceptional language-building abilities, Tolkien created Middle-earth as the fictional setting for much of his legendarium.

Middle-earth is often used as the shorthand to describe Tolkien’s fictional universe. The phrase derives from the Middle English (fitting) ‘middel-erde’. It may also draw inspiration from Old Norse and Germanic mythology, in which the universe as we know it consisted of many interconnected physical words, with ‘midgard’ (middle-earth), at the centre.

Last but not least, here’s a word you can use to switch up your everyday vocab. Next time you go to visit your grandparents, keep your eyes peeled for mathoms, a popular Hobbit possession.

Mathom comes from the Old English ‘maðm’, meaning treasure, which fell out of use in the 13th century. In the Shire, it’s commonly known as a Hobbit’s trinket, typically a useless heirloom. Tolkien went further and revived ‘mathom-house’ as a museum stuffed with old curiosities.