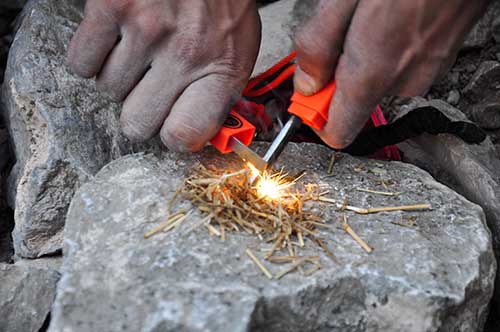 A Brief History of Survival

We tend to think of ‘survival’ as something that happens in the face of a catastrophe. However, the original survivors didn’t have to try very hard or do anything especially heroic. They simply lived on after someone else had died.

In fact, to survive literally means to ‘live beyond’. It comes from two Latin words: super, which means ‘above, over, or beyond’ and vivere, which means ‘to live’. These two words word combined to produce the verb supervivere, which over time morphed into the Provençal word sobrevivre and the Old French sourvivre. After the Norman Conquest, this was adopted in English as ‘survive’, with the noun ‘survival’ being formed from it in the sixteenth century.

The concept of ‘living beyond’ was important for both the Law and the Church, and both institutions embraced the word ‘survival’. In legal terminology it was used in the discussion of the inheritance of property by those who lived on beyond the property’s original owner, and in the Church it was used to express the concept that the soul might live on beyond the life of the mortal body.

Alongside these meanings, ‘survival’ also referred to living on beyond a particular event, such as a disease or trauma, and in the twentieth century this gave rise to a range of new concepts. The large-scale movement of troops during wartime exposed them to great peril, and this led to the thought that it might be as well to plan for survival in the event of a ship sinking or a plane going down rather than just crossing your fingers and hoping for the best. The term ‘survival kit’ (a pack containing first-aid equipment and other essentials for keeping yourself alive) was first recorded during World War Two. When manned rockets were pioneered after the War, the pilots were placed in a ‘survival capsule’, which could be detached if the rocket went out of control. Around the same time, climbers began to use plastic ‘survival bags’ to help them ward off exposure should they have to spend the night on an icy mountain.

The idea of planning for survival reached its zenith in the concept of ‘survivalism’, which arose during the Cold War. At a time when a nuclear conflict between the USA and the Soviet Union appeared a distinct possibility, some Americans took steps to ensure their personal survival in the event of such a catastrophe by stockpiling supplies and living self-sufficiently in the wilderness.

While not everyone would want to forgo the comforts of civilization to this extent, the idea of acquiring the necessary skills to survive in the wild is attractive to many people. So, in the twenty-first century, survival has increasingly become a branch of the leisure industry, with people electing to attend ‘survival camps’ or ‘survival weekends’ not because they are going to war, but simply because they want to gain satisfaction from testing themselves to the limit in an extreme environment.