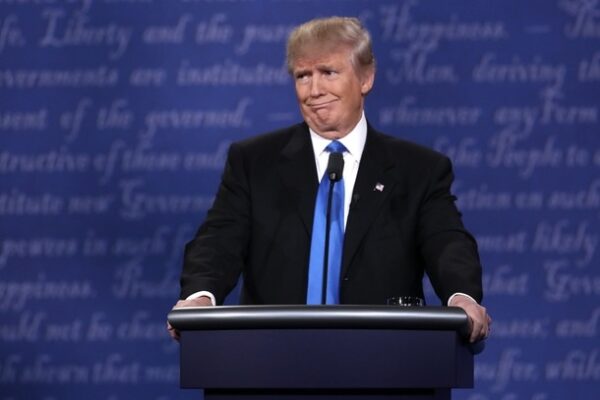 If 2016 was the year of post-truth, perhaps 2017 will be the year of alternative facts. That’s the term the Trump Administration has selected for statements that are, to use parliamentary language, economical with the truth. The phrase was coined by “Senior White House Aide” Kellyanne Conway (yes, that is her real name) in reference to White House Press Secretary Sean Spicer’s claim that Trump’s crowd on 20 January 2017 was “the largest ever to witness an inauguration. Period”. This “alternative fact” seems to be contradicted by photographs of a seemingly lacklustre and half-empty inauguration crowd, and by transit data released by the Metro Washington subway system, indicating fewer than 200,000 people had been using it to travel to the event (compared with over 500,000 people on the day of Obama’s first inauguration. So we’re not saying it’s a lie, but it may be a terminological inexactitude.

But “alternative facts” is not the only catch-phrase that has defined the early days of Trump’s presidency. After complaining for years about President Obama’s “unconstitutional” Executive Orders (an order from a US President that has the force of law), Trump lost no time in issuing a few of his own. One in particular, the so-called travel ban, suspends visas for 90 days for travellers arriving to the US from seven countries: Iran, Iraq, Libya, Somalia, Sudan, Syria, and Yemen. Because these countries have a majority Muslim population, and because terrorism was explicitly cited in the Executive Order, it has become colloquially known as the Muslim Ban, and has met with massive protests around the world – as has almost everything else the new president has done so far.

All of this threatens to overshadow the controversies of our own UK government, specifically the hard Brexit in our short-term future. Yes, hard Brexit has cropped up before, but only as a looming spectre. It is now a certainty, as Theresa May announced last month that we will definitely be leaving the Single Market. Supporters of Ms May’s decision might prefer that we call it a clean Brexit, though Ms May herself insists we will remain “Europe’s Best Friend”.

And talking of best friends and Brexit supporters, of the most prominent in both categories is none another than President Donald J Trump (yes, we’re still talking about him). The new President met with Theresa May in Washington last month, telling her that Brexit would be a “wonderful thing”, that he would get a trade deal between the two countries done “quickly”, and upgraded the traditional “special relationship” that exists between the two countries, coined by Winston Churchill, to a “fantastic relationship” – exhibiting the president’s natural talent for combining the prosaic with hyperbole in a single remark.

Mr Trump also suggested he would have a “fantastic relationship” with Putin, so watch your back, Ms May.