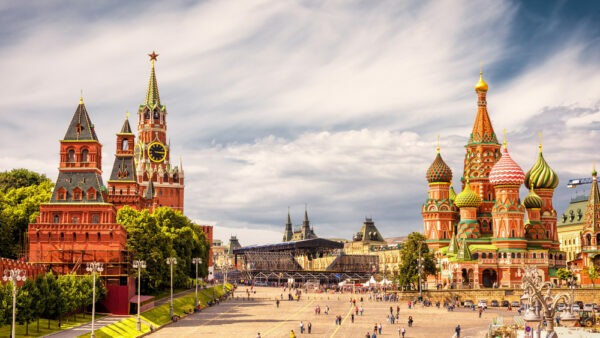 Are you a football fan visiting Moscow?

Springing immediately to mind at the mention of Moscow is the image of Red Square with the twin features of the imposing historic Kremlin and the shining onion-domed Cathedral of St Basil the Blessed.

The citadel of the Kremlin has been inextricably linked to all the most important historical and political events in Russia since it was built between the fourteenth and seventeenth centuries. Within its walls, the Kremlin contains a unique series of architectural and artistic masterpieces. These include religious monuments of exceptional beauty such as the Church of the Annunciation, Cathedral of the Dormition, Church of the Archangel and the bell tower of Ivan Veliki; and palaces such as the Great Palace of the Kremlin, the yellow-and-white palace of the tsars which contains the Church of the Nativity of the Virgin, and the Teremnoi Palace.

With five palaces and four cathedrals, the Kremlin has been a major influence in Russian architecture as well as a model for the kremlins, or citadels, in the centre of other Russian cities, such as Pskov, Tula, Kazan and Smolensk.

The Cathedral of St Basil the Blessed is widely regarded as one of the most beautiful monuments of Orthodox art. It was originally one of a pair of churches, the other being the Cathedral of Kazan, which were erected in 1633 by Prince Pozarsky to commemorate the victory over the Poles.

Lenin’s tomb, sitting in the shadow of the Kremlin walls, has contained the embalmed body of Vladimir Lenin since shortly after his death in 1924. Heavily guarded, the tomb still attracts hundreds of thousands of visitors who file around the tomb slowly and silently, catching a short glimpse of the former Russian leader.

One of the UNESCO World Heritage sites, the Kremlin and Red Square is a must-see area to add to any discerning football fan’s itinerary.