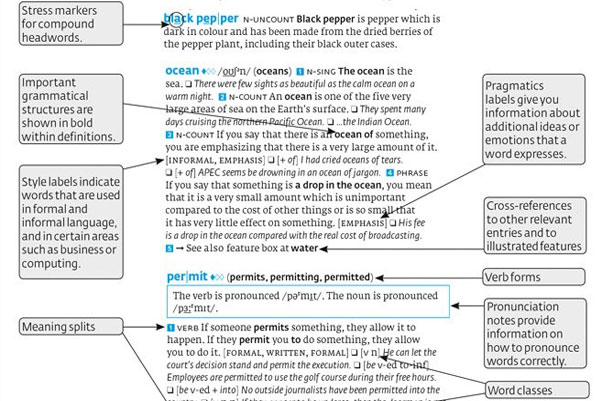 COBUILD Design and Layout: Changes over the last 30 years

Where were you 30 years ago? I was in the middle of my university studies, still to embark on my ELT career, and as such, a smidgin too late to be part of the intrepid and free-spirited COBUILD dictionary team. Led by the late John Sinclair, this large young team was involved in bringing to life his vision: to create a dictionary for learners that was based on a large digital language database – or a corpus. The corpus would be used for analysing word frequencies, for identifying new uses, collocations, colligation, connotation, and typical contexts for words and phrases. Definitions would be written in full sentences in the type of everyday English a teacher might use to explain a word to a learner, with the added advantage that users would see how the word would work in a sentence.

Looking back at the pages of that first edition, you might be struck by the density of the page design. It seems that we now need our text to be broken up with white space, boxes and varying fonts and colours: our modern brains seem to need a bit of a break between lines and entries. Was my intrepid and free-spirited self really so much better at reading tiny words all squished together on a page? Well, the answer is probably yes, as I remember my first encounters with COBUILD dictionaries were ones of delight; I don’t recall thinking ‘What? How do you expect me to wade through all of that?’ 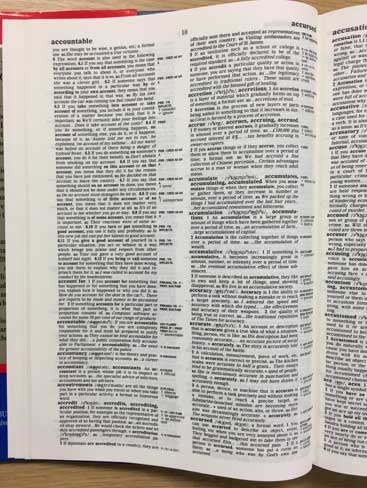 The other feature that jumps out at us from the pages of the first edition is the ‘extra column’. This was a narrow column down the right-hand side of each main column of dictionary text. It provided information on parts of speech and typical syntactical patterns, such as ‘V + O’ (= verb plus object) for transitive verbs, so that students didn’t have to search through the denser dictionary text for this type of information. Parts of speech were very specific; for example, adjectives might be ADJ CLASSIF: ATTRIB (a classifying adjective that occurs in attributive position) or ADJ QUALIT (a qualitative adjective), and verbs could be V ERG (ergative verb), v-link (linking verb) or V + O (transitive verb). The user can see the examples of use in the main dictionary text next to this information.

See the ‘extra column’ information for accusation below:

An extract from the entry ‘accusation‘ from the first edition

COBUILD’s ‘extra column’ was something of a showcase for the incredible amount of hard work that lexicographers and grammarians put into analysing the newly-built corpus. It told us all sorts of previously undocumented facts about how the English language works.

So, what does our mature 30-year-old dictionary look like now? Well, it has grown into an incredibly user-friendly go-to treasure trove of the English language, thanks to its sophisticated font design, useful information boxes, colourful images, and plenty of restful white space. It has a hugely popular online sibling, available at www.collinsdictionaries.com, and has inspired learners and lexicographers alike to use corpora to continue to learn ever-more fascinating facts about our language. Happy 30th birthday, COBUILD! 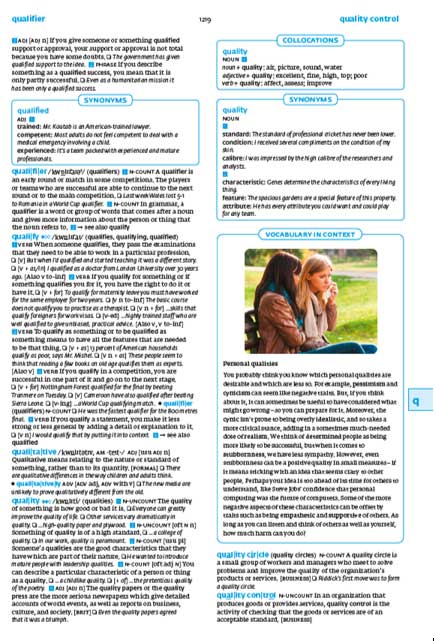 A page from the ninth edition, published in 2018

This blogpost has been written by Penny Hands, who is an ELT lexicographer and materials editor.