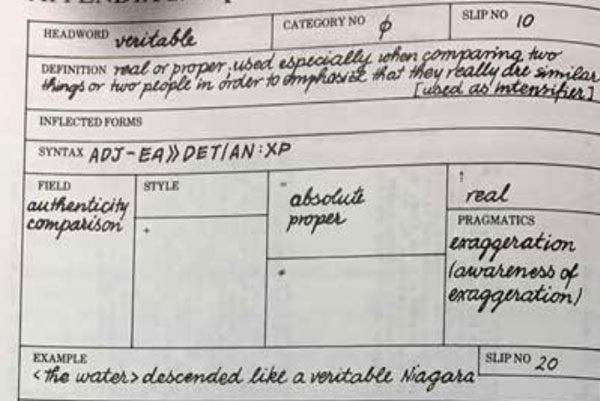 COBUILD: The Early Years: Part 1. Where it all began

I have always counted myself as incredibly fortunate to have worked as part of the COBUILD team at the time that I did, between October 1983 and the end of 1986. I was not quite 24 when I arrived in Birmingham, not knowing one end of a dictionary definition from another. By the time I left I was pretty sure lexicography was going to be my career and, over 30 years later, I’m still doing it.

My three years at COBUILD spanned the move in compiling practice from paper to computer. For the first year or so we were writing out individual dictionary entries on slips of paper, in much the same way that Samuel Johnson, James Murray, and all our other illustrious predecessors had done before us.

Pink slips were for each sense of a headword, on which we’d write the definition together with accompanying syntactic (and other) information. White slips were for individual example sentences selected from the corpus, all 7.3 million words of it, together with any example-specific information that needed recording. I can remember laying out on the floor a mosaic of hundreds of slips for a long, complicated word like live or way, shuffling all these meanings around into various groupings in an effort to settle on the best arrangement. An academic paper could be written on the role of the floor in lexicography. Once compiled, entries were then typed up into the dictionary database. 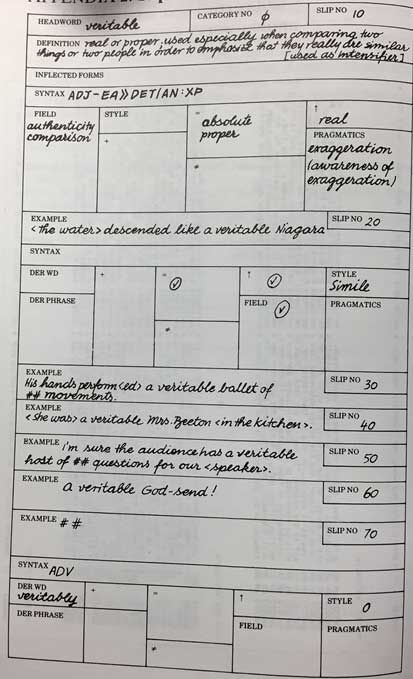 The slip of paper used for compiling the entry veritable 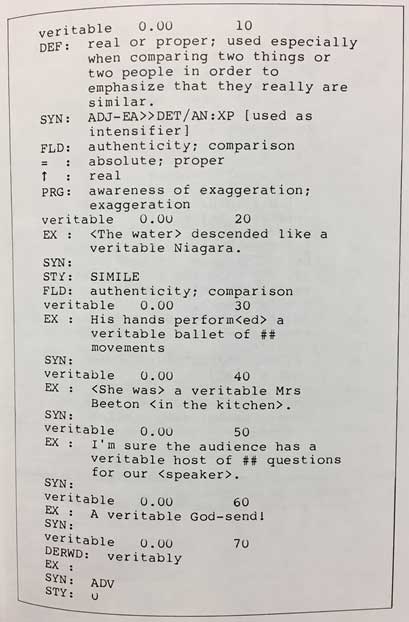 The corpus, the primary evidence for all our observations about the language, may have been created computationally, but initially we consulted that on paper too, in the form of printed-out concordances. In the early days of compiling we’d often highlight with coloured felt-tip pens individual concordance lines that illustrated different meanings of a word.

Concordances for veritable from the 7.3 million word corpus

Within a year or so, lexicographers were compiling and editing text directly into the dictionary database on newly-installed computer terminals, displaying green text on a black background. Compiling a dictionary on a computer was hugely innovative at the time but within a few years this would become the norm. So, I have a real sense of having been present at a moment of transition as one great lexicographical tradition was coming to an end and another was taking its first steps.

We were a fairly young team and for many of us this was our first experience of lexicography. So, I didn’t then have much to compare it with, in terms of methods and approach. But there was certainly a palpable buzz about the place. We knew we were doing something new. In some ways, it was only once the dictionary was published that I began to appreciate quite how radical and groundbreaking the COBUILD project was.

Look out for Part 2 coming soon…

This blogpost has been written by Andrew Delahunty, who is a freelance lexicographer, dictionary editor and reference book author with almost 35 years’ experience.