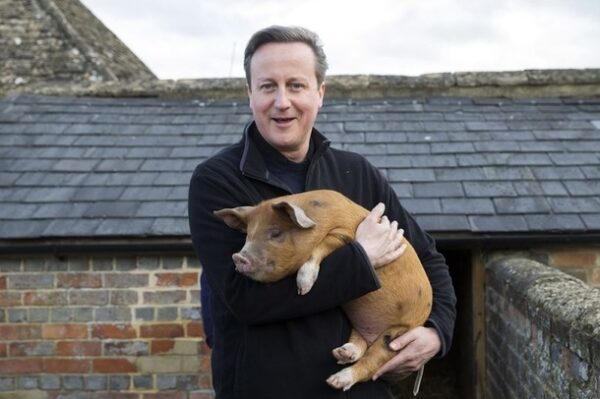 ‘Farquhar’, ‘Sangry’ and ‘Thighbrows’: Lucy Mangan avoids the pig-shaped elephant in the room with your new word submissions

I am resisting the temptation to fill this blog with the pig puns and other pieces of porcine wordplay that have been filling the internet since #piggate occurred. Or #Hameron happened. I shall not ask whether any PM has ever been rasher, or if he should get the chop and leave his wife to bring home the bacon. We are good people. We shall not live high on the hog of others’ misfortunes.

Let that be the “endsay”, you might say. Submitted by myself5000, it means the very last word or comment on a situation. That’s right – not another sausage shall be heard here. We move on.

New contributor harris gives us “prosopoplasty” (prosopa originally were the masks used in Greek theatre), a recent coinage by a cosmetic surgeon to cover the times when numerous procedures are done at once to improve or alter a patient’s appearance. You might have a neck as well as facelift, plus a blepharoplasty, a spot of liposuction and dermabrasion at the same time if you wanted to knock some years off, for example, or if you were in a high profile job and currently suffering from the revelation of a story that caused you some personal or professional embarrassment and fancied going incognito for a bit.

Such a story could well cause you to feel “sangry” – sad and angry – which has been contributed by InformalEnglish. I don’t like it as much as I like “hangry” – the very specific anger brought on by hunger, for which I have long needed a name – but I can see that it could come in useful. Does anyone want to invest in my brilliant idea for a chain of Hangry kiosks up and down the land, in all the places that have been deemed too small or isolated for Prets and its ilk? Wherever furious people with low blood sugar dwell, there we shall be, selling Mars Bars, mini BabyBels and – for prime ministers in emergencies – ham sandwiches. Hamwiches, we’ll call them, because we’re only kiosks and we need to keep signage to a minimum. Our offerings might not do much for the “diabesity” epidemic (a blend of diabetes and obesity, submitted by tikitaka, reflecting the conditions’ increasing commingling in our increasingly fat-slabbed life) but it will help our “thighbrows” (also a tikitaka contribution). These are the creases formed between the tops of your thighs and your hips when you sit or kneel down. They are best shown off, I discover during a brief Googling of the term, by a “frong” – a front-facing thong, which looks exactly as uncomfortable as you think.

Finally, there’s “farquhar”, submitted by MiniNinja, to denote a posh person, possibly – given its aural suggestiveness – a little derisively. So, for example, a posh person who did something really daft, maybe years ago as part of an initiation into a posh drinking club (you know what they’re like) and had it recently made public knowledge might then become known by that public as a “silly farquhar.”

Right, back to work, everyone. Chop chop.