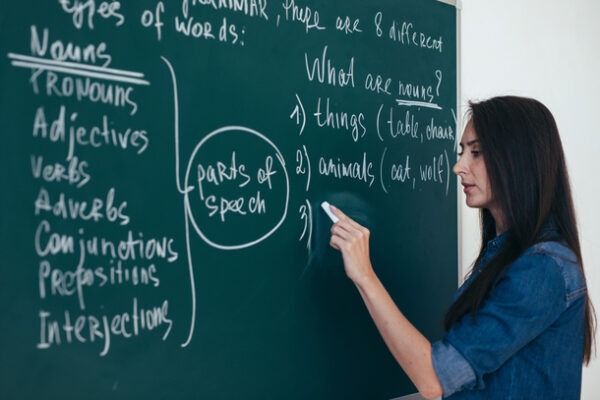 Grammar or vocabulary? A blurry line

This article has been written by Julie Moore, who is an ELT materials developer and lexicographer, and originally appeared on our ELT Blog.

Most language learning coursebooks include grammar activities and vocabulary activities. As teachers, we talk about ‘teaching grammar’ and ‘teaching vocabulary’. Grammar and vocabulary are two of the key strands of language learning, yet are they really as separate as we tend to view them? In this post, I’ll look at three ways in which the line between grammar and vocabulary can get blurred and consider whether we should actually be thinking of them more as two ends of a continuum with large areas of overlap in the middle.

If you look in a dictionary, the archetypal vocabulary resource, you’ll find plenty of information about grammar, usually in the form of labels; N-UNCOUNT, V n, usu ADJ n, etc. That’s because individual lexical items – words, phrases, phrasal verbs – typically behave in particular ways; they have grammatical features associated with them. Teaching about these lexico-grammatical features straddles the line between grammar and vocabulary.

So in many coursebooks, you’ll find the topic of countable and uncountable nouns labelled as ‘grammar’, but it’s almost always taught alongside a vocabulary set, often food (bread, pasta, apples, carrots, etc.) That’s because the two can’t be separated; you can’t easily talk about the concept of countable and uncountable nouns, especially at low levels, without looking at specific instances. So, for example, in the Collins COBUILD English Grammar, an uncountable noun is described as a noun which refers to “general things such as qualities, substances, processes, and topics rather than to individual items or events”, but that explanation only really makes sense because it’s followed by example sentences and a list of common uncountable nouns.

Similarly, you can only understand the concept of transitive and intransitive verbs with reference to specific examples – you always achieve something or provide something, but you just arrive or hesitate. Or when we teach about stative verbs, verbs which describe a state, such as exist, know, belong, we have to explain both which verbs they are – a set of vocabulary – and also how they behave grammatically, i.e. that they aren’t generally used in progressive forms.

Why is it that you delay doing something, but you wait to do something? It’s a matter of verb form and sentence structure; when two main verbs occur together, there’s a choice to be made about the form of the second verb. So is this a question of grammar? Well, it feels a bit like grammar, but when it comes down to explaining these types of patterns, you find that actually it’s more about the individual verbs: the vocabulary.

Many of the choices we make about form and structure are actually determined by our choice of vocabulary: particular words are typically used together with particular patterns and structures. This isn’t only true of two verbs that occur together, but also of noun + verb combinations in noun phrases:

And these patterns aren’t just about verb forms. When words (nouns, verbs, and adjectives) are followed by a prepositional phrase, then the choice of preposition is often determined by the individual word it follows:

Clearly, none of these patterns can be taught as a one-off set of ‘rules’; instead they need to be seen as part of ongoing vocabulary development. They need to be highlighted – either individually or in small sets – as part of the process of deepening students’ understanding of vocabulary; going beyond surface meaning and thinking about how words behave in sentences.

The final area where grammar and vocabulary overlap is when we think about what we want to do with language; functions. If I want to express uncertainty about my plans for the weekend, I could say:

In each example, I’ve used a different linguistic feature to express roughly the same idea – a modal verb (might), an adverb (maybe), and an expression (be thinking of doing something). And, of course, if I want to ramp up my level of uncertainty further, I can combine them:

I was thinking, I might possibly go to the cinema on Saturday, _if there’s nothing else going on._

Which of these features would typically be taught as part of a grammar syllabus and which as vocabulary? When we speak (or write), we use whatever linguistic resources seem to fit best at the time. Sometimes these are grammatical choices, sometimes they’re more down to vocabulary.

This isn’t just the case with modality, although it’s an interesting area which we’ll return to in a future post. All kinds of functions can be fulfilled by either grammatical or lexical choices. If I want to say that two things are similar, I can say:

Does it matter how we label language?

So does it really matter whether we label the language and linguistic features we teach as grammar or vocabulary? Well, for the most part, it probably doesn’t – if we teach language in a clear and engaging way, then the heading at the top of the page isn’t massively significant. We tend to label activities as ‘grammar’ or ‘vocabulary’ as a convenient way of categorizing what we do in class. It makes it easier to match lessons up to a syllabus and to keep track of what we’ve covered when it comes to assessment. However, sticking with this traditional grammar-vocabulary split does have some risks. We risk some key features of language being undertaught and falling through the gaps simply because they don’t fit neatly within either the grammar or the vocabulary syllabus. And we don’t want to limit our students’ language choices by labelling a topic or function as either grammar or vocabulary. They need to be able to make linguistic choices based on what they want to express, not on the part of the syllabus we’re teaching. In short, we perhaps need to be a bit more flexible with our linguistic boxes.

You can find out more about grammar and grammar patterns in the Grammar area of this website.