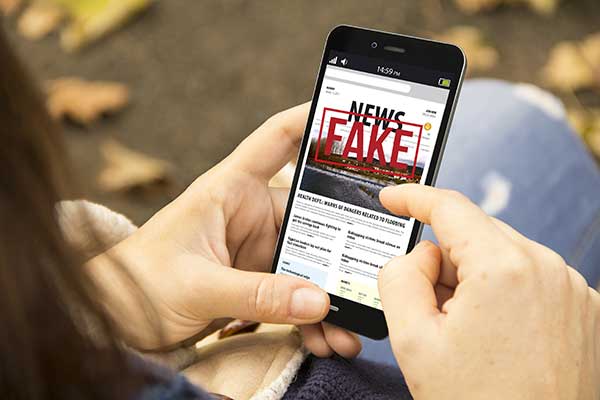 How the Truth Got Cancelled

For many observers, the 2010s were the decade of fake news. In 2016, Donald Trump appeared to use the word ‘bigly’, which soon caught on as a humorously intensifying adverb, even though it turned out that Trump himself had actually said ‘big league’. And ‘bigly’ itself is attested as an adverb meaning ‘violently’ or ‘boastfully’ since the 15th century. So the story that Trump uttered a nonsensical word was, on this occasion at least, ‘fake news’: itself voted Collins’s Word of the Year in 2017, and inescapable ever since. More serious than the tittering over ‘bigly’ was Trump’s habit of preceding that phrase with a definite article — ‘the fake news’ — thus implying that all the news was made up.

People already spoke warily of ‘false news’ in the 16th century, while even ‘post-truth’, considered by some to be the definitive condition of our social-media age, dates back at least to 1992. There might never have been a golden age of truth, but we are on some measures living through a golden age of ‘truthers’. After the ‘9/11 Truth’ movement alleging alternative theories of the World Trade Center attacks, a ‘truther’ throughout the 2010s came to mean anyone who embraced conspiracy theories that ran against official narratives on all sorts of subjects. This is somewhat paradoxical, since ‘truther’ was first used in the early 20th century to mean someone who told the truth.

Some truthers were accorded their own descriptive nouns: so, a ‘vaccine truther’ (who claims vaccines are poisonous) could, from 2009, be termed an ‘antivaxxer’. Antivaxxers prefer to describe themselves as ‘vaccine sceptics’, because scepticism is presumed to be rational, though — like self-described ‘climate sceptics’ who deny the truth of global warming — they do not apply their scepticism equally to arguments on both sides.

The emerging language of personal affairs in the last decade also revolved around issues of truth and trust. ‘Gaslighting’ — the subtle manipulation of someone into doubting the truth — became a widely recognised phenomenon in relationships, as did the avoidance of relationships in the first place via ‘ghosting’ (cutting off all communication) after a date. Perhaps most useful of all was the enthusiastically adopted term ‘mansplaining’, first recorded in 2009, and inspired by a celebrated 2008 essay by Rebecca Solnit entitled ‘Men Explain Things to Me’.

In the UK, the political term of the decade was inarguably ‘Brexit’. Coined in May 2012 by Peter Wilding, a former government advisor, it went on to become Collins Word of the Year after the referendum in 2016. Boris Johnson has reportedly now banned the word from Downing Street communications, but it — and the associated rhetorical contest between ‘Brexiteers’ and ‘remainers’ — may have quite some life in it yet.

Technology, meanwhile, gave us terms such as ‘influencer’ — a photogenic person on social media who recommends products with which they may or may not have an undisclosed financial relationship — and its increasingly absurdist spin-offs, such as ‘momfluencer’, ‘cleanfluencer’, and ‘petfluencer’. Nervous talk about the ‘darknet’ or ‘dark web’, meanwhile, bespoke an awareness of a dark iceberg beneath the surface froth.

The 2010s also saw the rise of what the novelist Bret Easton Ellis called ‘cancel culture’. In around 2013, people began to declare that celebrities who had expressed disobliging opinions were ‘cancelled’: no longer worthy of respect or even continued work. Perhaps this derives from the legal sense of ‘cancel’ meaning to annul a document: the offending person is now no longer recognised as a source of cultural authority. It is unclear whether Ellis should now be regarded as ‘cancelled’ himself.

For its word of the decade, the American Dialect Society recently voted for singular ‘they’, as used today by those who identify as nonbinary, a usage first recorded in 2009. There is a long history of people complaining that singular ‘they’ is ungrammatical, but an even longer history of its use as a gender-neutral singular pronoun, dating back to medieval romances, so any person still wishing to complain ought to realise that they have picked a long-lost battle. Wordfluencers might flinch, but you cannot stop progress, even if you try to cancel it.

Steven Poole is the author of A Word for Every Day of the Year (Quercus).