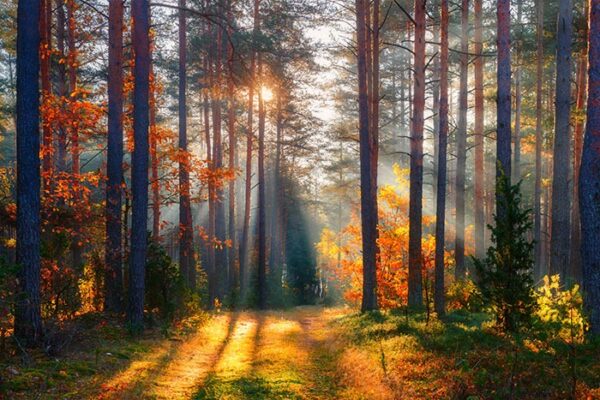 Thank you so much, Colin T. McDonough, for submitting ‘komorebi‘. It’s a Japanese word that means “sunlight that filters through the trees – the interplay between light and leaves”. It’s mentioned in many places as being one of those ‘untranslatable’ words – which is to say, ones whose meanings we have to resort to clumsy circumlocutions to describe* – which kinda leaves me feeling bad for ‘dappled’. Is that softly evocative, lovely word too little used to count? Surely not. Does ‘komorebi’ have some additional meaning or subtlety that we are not conveying with our native vocabulary? If any Japanese-English speaker could offer his or her thoughts on the matter, I would love to hear them. In the meantime, I truly believe that the more words we have to describe dappled sunlight, the happier the world will be, so let’s all get ‘komorebi’ circulating as soon and as much as we can.

Then there’s ‘sitzfleisch‘ from JohnWatson. It’s German for “sitting on the flesh” and it was originally used in chess to refer to the practice of sitting and making safe, uninspired moves until your opponent makes a boredom-and-frustration-induced mistake. Now it’s a handy word for enduring anything stolidly, or clinging stubbornly to a practice (and, possibly, driving everyone mad in the process).

Continuing our international theme, moneillsubmitted ‘Dogue de Bordeaux‘ – the dog known over here as the French or Bordeaux mastiff, a venerable and muscular breed that was originally put to work pulling carts and guarding the castles of the European aristocracy. Think of them and their mighty slavering jaws as an early and more immediately off-putting version of security gates and wall-mounted CCTV. But I’ve included it here mostly because ‘dogue’ is how I’ve always thought ‘dog’ should be pronounced in French, and it made me laugh. And then it made me wonder if – given that it’s such an ancient breed – maybe that was how it was originally pronounced in French, but my cross-border etymology skills are not all that they might be, so if any Gallic readers could advise, s’il vous plait?

‘Glassionista‘ comes from hootananny, but as it means “someone who wears google glasses in a very stylish way” I suspect it has been submitted more in hope than expectation. But in a shared spirit of optimism, I mention it here and hope that one day it will meet a need.

I’m unsure about ‘Gaptist‘ – a shorthand way of informing people that you are a gay member of the Baptist church, contributed by thepinksheep– because the sound and the inclusion of ‘gap’ makes me think it would be better used to describe a subset of dentists (either incompetent ones or those who specialise in particularly unevenly spread teeth). But I have consulted with a friend of mine who hails from San Francisco and is himself a gay Baptist. After much thought, he has decided that its usefulness in breaking the ice at formal dos and work parties and so on when you can’t guarantee you’re not entangled in conversation with an idiot, (“You just call yourself a Gaptist and explaining the joke distracts people from the gay bit”) outweighs my concerns.

So, go forth and find yourself a patch of komorebi under a tree and preach. See you in a fortnight.