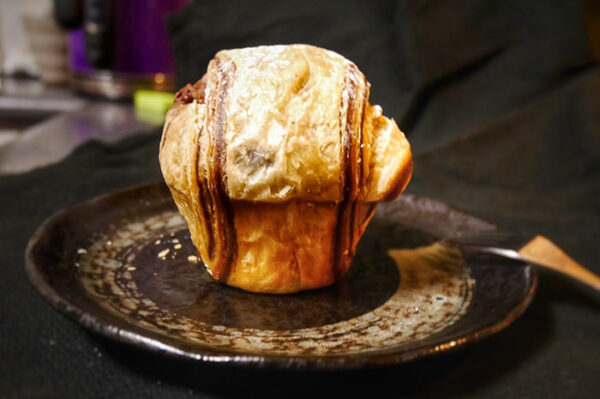 Lucy Mangan has a bag full of new words – see which ones she has pulled out!

MiniNinja has sent me ‘duffin’. Not a duffin, alas, but I’ll take an addition to my word store in lieu of my store cupboard if I must. The duffin – combining as it does the best of the doughnut and the muffin – is the latest member of the growing army of patisserie hybrids being created by bakers (mostly in the US but I have faith that the powers of globalisation will for once be mobilised for good instead of evil and bring them to these shores soon) working tirelessly to bring us, if not health, then at least a very good helping of happiness. First there was the cronut (croissant-doughnut), followed swiftly – such is the ceaseless ingenuity of man in pursuit of empty calories and solid profit – the fauxnut (the cronut made with puff pastry instead of true croissant dough – do at least try to keep up at the back there), the muffle (muffin-waffle) and the crookie (Oreo cookie-croissant). I am confident that by the end of the year we will have been introduced to the iced VictoriaclairSwissdanishstollenjamchocolatebuttercreamburg and my life with be complete. Diabetic and housebound, but complete.

To wash my portmanteau patisserie down – and to continue the compound-theme, I will take a glass of spinkling Prosecco; ‘spinkle’ being Mark_Baber’s timely submission, meaning the sparkling, twinkling appearance of bubbles in liquid. That my first thought was actually “But where does that leave farts in the bath?” is a fact on which I do not wish to dwell.

Tommyhas contributed ‘balbo’ to the proceedings, meaning a facial hair arrangement involving a moustache and beard that do not join up. I know. But just when you thought things couldn’t get any worse, it turns out it is named after an Italian fascist – Mussolini’s heir apparent, apparently – called Italo Balbo, who sported this offence against God and eyes for much of his life. Let us shiver violently and move on.

OldMissPiggy sent in ‘pnomophobia’ meaning “the same as nomophobia” – a word that was submitted by Persephone and that I wrote about last month, meaning the fear of the loss of one’s mobile or phone signal. Now, loathe as I am to criticise anyone with as excellent a name as OldMissPiggy, I have to confess to some reservations regarding her novel synonym. I can see what’s happening – a silent ‘p’ mirroring the silent ‘p’ (well, not exactly silent, but you know what I mean – and if anyone knows the correct term for what’s going on when a ‘p’ nips in front of an ‘h’ to be an ‘f’, don’t be backward at coming forward about it). BUT – it don’t look right. It don’t work. It makes me think that someone’s afraid of fake boobs, not phone loss. Could we perhaps compromise on “phonomophobia”? “Nomophonbia”? Pno? Poh well. I ptried.

Thank you for all your submissions – do keep them coming. See you next time!