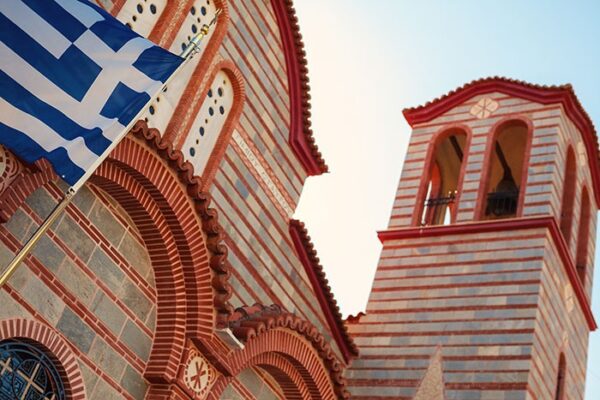 Lucy Mangan learns some new words from the Greek Orthodox Church, as well as a new type of pasta

So, it looks like there may be an English word for schadenfreude after all. According to WritersCramp, it’s ‘epicaricacy‘ and covers the same convulsion of joy in another’s misfortune that the Teutonic loan does. What we lose in “Tuh – trust the Germans to have a word for it!” jokes we gain in native pride. Or maybe shame. I’m not sure.

‘Zita‘, from contributor tropes, is a kind of pasta. It’s basically giant macaroni. Many of you probably know it already, but I didn’t and so I include it here as a mark of my gratitude. Anyone who improves my Italian restaurant-ordering skills and facilitates the advent of any kind of oversized carbohydrate into my life gets thanked from the bottom of my strained, sluggish but happy heart.

Continuing the food/cardio theme, my heart goes out to cakingcrazy who this week submitted ‘caketastrophe‘ and attached the plangent description “used when a professionally-decorated cake suffers a major disaster such as being dropped and is no longer presentable or edible.” I feel your pain, cakingcrazy, and I’m sorry for what I deduce to be your loss, but if I may say so – a cake that has been dropped may indeed, for reasons of professional pride and reputational issues be no longer presentable but it by no means follows that it is inedible. By no means. Send it to me and I’ll show you what I mean. Because you are looking at someone who, when she first saw the word ‘caketastrophe’ immediately assumed that it referred to a situation in which there was no cake to be found at all. Anything short of that, I would suggest, is nothing more than a bit of a cakebugger.

Returning to our savouries for a moment, thank you peraperic55 for contributing ‘prosphora’ and ‘antidoron‘– terms from the Greek Orthodox church meaning, respectively, the blessed loaves of bread from which the portions to be consecrated for the Eucharist are cut and the leftover pieces, which are handed round the congregation thereafter. So now you know.

As long as you’ve read this far, of course. As long as you’ve not found this whole thing ‘tl;dr‘ (submission courtesy of Dave), or “too long; didn’t read.” Obviously, the existence and implied necessity of such an abbreviation sets us adrift on a sea of despair (although you could try and use the inclusion of a semi-colon as a paddle of hope to steer you back to dry land. Then again, you could have thrown yourself overboard as soon as you read “paddle of hope” (and I wouldn’t blame you a bit) but here we are and there you go.

What a world, my friends, what a world. See you next time, if you survive another fortnight in it. WOULD SOMEONE PLEASE SEND ME SOME CAKE?