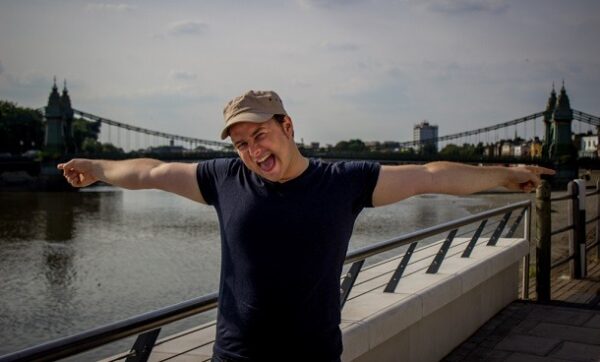 My Story, Your Passion – Benny Lewis’s inspirational story of how he became a globe-trotting polyglot (part 2)

Taken from the introduction to Fluent in 3 Months, by Benny Lewis, available on collins.co.uk at 30% discount when you use promo code 31DAYS. Read part 1.

Give Yourself Goose Bumps

So how do you develop this passion, if extrinsic benefits have been clouding your vision? For a start, seek out films and art and history from the country where your target language is spoken, listen to music in that language, read books and magazines, find as many sources of audio, video, and text online as you can, and absolutely spend time with native speakers – which you’ll notice I’ve dedicated an entire chapter to, without requiring that you travel to their countries.
Even when I know I am going to a country and have my flight booked, or even when I’m in the country itself, I can get lazy and make very slow progress unless I make that language a true part of my life. Doing so lets me grow passionate for the language.

Here’s a good time to tell you about my friend Khatzumoto.

After speaking and reading Japanese exclusively for just eighteen months, he could read technical materials and conduct business correspondence and job interviews, all in Japanese. He ultimately landed a job in Japan as a software engineer at a gigantic corporation based in Tokyo.

The amazing thing is that Khatzumoto reached this stage by living his life in Japanese . . . while in Utah! He filled his world with Japanese virtually. He watched anime, read manga, consumed his favourite sci-fi series dubbed in Japanese, and surrounded himself with everything Japanese during every spare moment of his day, even though he was a full- time computer science student. By integrating his target language into his day-to-day living, he gave himself no escape route; he had no choice but to live most of his days in Japanese. As a result, his passion for the language grew. Today, his motto for learning Japanese, or for learning any language, remains ‘You don’t know a language, you live it. You don’t learn a language, you get used to it.’

Nothing creates passion for a language more than using it. Similarly, nothing I say about why you should learn a new language will be more convincing than the first time you understand your first sentence, or the first time you make yourself understood, in a different language. These moments will give you goose bumps, and the immense feeling of satisfaction that comes with them will stay with you forever, as well as thousands of other positive experiences that will follow.

The passion ingredient is what makes learning languages worthwhile; you simply have to live that language in whatever way you can to have your passion sparked. Spend time with natives of the language, listen to streamed radio, watch TV shows and films, or read books in the language, and you will spark your passion, which will motivate much more progress than any side benefit could ever hope to inspire.

How Far Are You Willing to Go?

Moses McCormick is a well- known polyglot who often posts online videos in languages that he’s learning. He can communicate, in varying degrees – from knowing a few phrases to being able to converse very well – in about fifty languages. When he was trying to improve his Hmong, an Asian language rarely known to Westerners, he told me the one place where he could consistently practise with native speakers was in online chatrooms.

That’s all well and good, but one major obstacle, he said, was that most chatrooms were often filled with men interested only in meeting girls. They weren’t interested in continuing a conversation with another guy. So what did Moses do? He created another screen name and logged in as a woman (a virtual sex change operation, if you will, only taking just an instant and totally reversible). Even when he said he was married, he still found that people were much more eager to chat.

Would you go to such lengths to get some practice time in your target language? If not, then maybe you aren’t passionate enough to get the results! I’m obviously not saying that logging into a chatroom as another gender is a prerequisite for speaking another language, but going to such lengths and being willing to do whatever it takes, no matter what the level of embarrassment, will greatly improve your chances of being successful.

The Right Mentality Will Launch You Forward

Success in language-learning doesn’t come from having the perfect circumstances or require a perfect language-learning system. Success relies heavily on facing challenges with the right mentality, having motivation and passion, and sticking to the learning process until you charge through the ‘brick wall’ in your way.

Someone with mountains of passion will always find a way to progress in his or her target language, even if that person uses inefficient learning approaches or gets stuck on plateaus for long periods of time. There are successful language learners who learn very differently from me – sometimes slower, sometimes faster, sometimes with better language skills or more languages under their belts. Without fail, however, the one thing we always have in common is passion.

In fact, every language-learning challenge I have ever taken on has had its disappointing failures. I’ve had moments when I felt like giving up, when I saw others doing much better than I was, and when I had trouble finding people to practise with. I’ve struggled with conversations that went nowhere, had some rough starts, hit plateaus, forgotten words I should have known, and experienced countless other obstacles that made me feel like a failure, all of which led to many hours of frustration. But I kept going because I wanted to keep going. I had a passion for language, and that’s how I’ve been able to learn to speak twelve languages and counting. Once you learn one new language, you’re off and running. Learning the first foreign language gives you the skills to learn a second, and then a third, faster and more efficiently.

In Fluent in 3 Months, I’ll show you how to master a new language, with the lessons I’ve learned and the techniques I’ve applied while transitioning from a monoglot to a polyglot, plus give you solutions to – or ways around – difficult problems. Believe me, none of it involves re-engineering your DNA to add in the language gene. Instead, this collection of lessons can be used by any language learner, at any stage or any age, and it includes the same lessons millions of people have already been using on my blog: www.fluentin3months.com.

The first step in language-learning is to make the commitment to do whatever it takes to make your project a success. If you have the passion to do what it takes, no matter what that may require, then this will ensure that you will, soon, be able to speak your target language.

Benny Lewis is the bestselling author of Fluent in 3 Months, available on collins.co.uk at 30% discount when you use promo code 31DAYS.