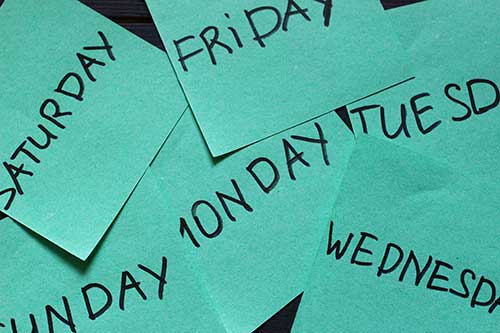 Paul Noble – an easy way to learn the days of the week in another language!

Bestselling language coach Paul Noble has a quick and easy way to help you learn the days of the week, using the meaning behind each of the terms. Well, what are you waiting for? Read on!

Most people aren’t aware what the days of the week actually mean in Spanish, French, German and Italian. If they were, they might be surprised how much easier to remember, more meaningful and more beautiful they become.

Let’s take a look at them!

Monday, in English, actually means “Moon’s Day” and the same is true in Spanish, French, German and Italian.

The Spanish use their word for moon, which is “luna” (think “lunar”) and combine this with the last two letters of the Latin word for “day”, giving them with “lunes”.

The French use their word for moon, which is “lune” (think “lunar”) and then add the Latin word for “day” to the end it, making “lundi”.

The Germans use their word for moon, which is “Mond”, remove the “d”, and add the German word for “day” (Tag) onto the end of it, giving us “Montag”.

The Italians use part of their word for moon, which is “luna” (think “lunar”) and then add the Latin word for “day” to the end of it, making “lunedì”.

So, to make Tuesday in Spanish we take the Spanish word for Mars “Marte”, and again combine this with the end of the Latin word for “day”, giving us “martes”.

To make Tuesday in French we take the word “Mars”, remove the “s” from the end, and again add the Latin word for “day” to the end of it, making “mardi”.

Germans dedicate Tuesday to “Týr” as well. But because an English “T” can be swapped for a “D” in German, the German word for Tuesday starts with a “D” instead. So “Týr’s Day” in German ends up as “Dienstag”.

To make Tuesday in Italian we take the Italian word for Mars, “Marte”, and add the Latin word for “day” to the end of it, making “martedì”.

Ah, here we are now at “Wednesday” or “Wodan’s Day” as it really should read in English.

In French it also celebrates Mercury. Adding the Latin word for “day” to the end makes “mercredi” – Mercury’s Day / Wednesday.

In German it simply celebrates the fact that it’s the middle of the week, making Wednesday in German “Mittwoch” – quite literally “midweek”.

In Italian, like French and Spanish, it celebrates Mercury, making Wednesday Mercury’s Day in Italian – “mercoledì”.

In English, the day after Wodan’s Day is of course “Thor’s Day”, now written “Thursday”.

In Spanish, by contrast, the day belongs to Jove, King of the Gods. Jove’s Day in Spanish is “jueves”.

This is the same in French. So, with the Latin word for “day” on the end again, it makes “jeudi” – Jove’s Day / Thursday.

In German, it is exactly the same as in English. “Thor” in German mythology, however, is called “Donar” and so Thursday in German becomes “Donnerstag” – Donar’s Day / Thor’s Day.

In Italian, like in French and Spanish, the day belongs to Jove, king of the gods. Jove’s Day in Italian is “giovedì”.

Friday in English means “Frigga’s Day”. “Who is Frigga?” you may ask. Well, she was Odin’s wife and Thor’s mother. She was also, for the earliest English people, the goddess of love.

The same was true for German as for English, making Friday in German very easy for English speakers to remember – “Freitag”.

Italian like French and Spanish, also names Friday after a goddess of love, Venus. So, Friday in Italian is Venus’s Day – “venerdì”.

Saturday in English is “Saturn’s Day”.

The Spanish for Saturday simply means “Sabbath”, as the Sabbath was originally observed on Saturday rather than Sunday. Saturday in Spanish is therefore “sábado”.

The French for Saturday comes from the Latin term “sambati diēs”, which means Sabbath Day. This, in modern French, has become “samedi”.

The German for Saturday also comes from words that in old German meant Sabbath Day”. Saturday in German is therefore “Samstag”.

The Italian for Saturday means “Sabbath”, as in Spanish. So, Saturday in Italian is “sabato”.

I’m sure you can guess the meaning of Sunday in English; clearly it is the Sun’s Day.

In Spanish, though, its name comes from Latin– from “diēs Dominica” – meaning “the day of the Lord”. In modern Spanish this has simply become “domingo”.

In French its name also comes from Latin – from “diēs Dominica” – meaning “the day of the Lord”. In modern French this has simply become “dimanche”.

And the same is true in German as in English. “Sun” in German is “Sonne” and so Sunday becomes “Sonntag”.

In Italian its name comes from Latin again – this time from “diēs Dominica” – meaning “the day of the Lord”. In modern Italian this has simply become “domenica”.

So, there you have the days of the week in Spanish, French, German and Italian – 4 for the price of 1. Hopefully they hold a little more meaning for you than they did before.

Do you want to find out more about Paul Noble’s language learning methods? The Unlocking series of books are available now:

Or have a look at the acclaimed Paul Noble audio courses