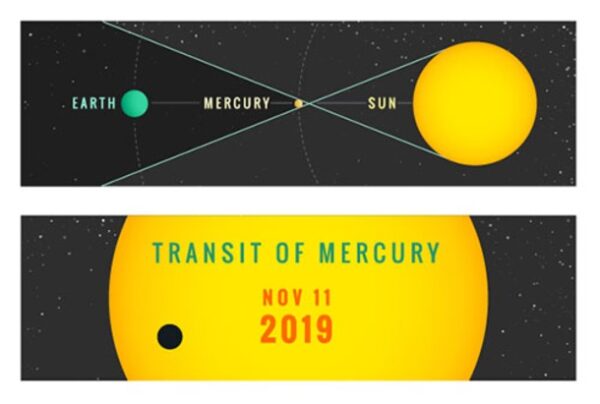 Remember, remember, the 11th November: the Transit of Mercury

On November 11 there is a transit of Mercury, when, as viewed from Earth, Mercury passes across the face of the Sun. (Almost needless to say, but never view the Sun directly, either with the naked eye or with any form of optical instrument. Always use a proper solar filter – the ones that look like aluminium film – a solar telescope, or project an image onto a card for safe viewing.)

Transits are rare. They may occur only with the inferior planets, Venus and Mercury, that are inside the Earth’s orbit. Transits of Mercury do not occur every year, and even then come only in May or November, when the locations and orbits of Mercury and Earth are suitably aligned. (An interval of 13 years between transits is the most common timing.) Following the transit on November 11, 2019, the next transit will be on November 13, 2032.

Transits, particularly of Venus, were very important historically, because they could be used to determine the sizes and distances of objects in the Solar System (not just Mercury, Venus and the Sun). Some important expeditions to various parts of the world to observe transits were carried out in the 17th and 18th centuries. Nowadays, the transit method is the main way in which the existence of exoplanets (planets orbiting stars other than our Sun) is determined.

By Storm Dunlop with charts by Wil Tirion, authors of Guide to the Night Sky 2020

Wil Tirion was trained in graphic arts and has always had an interest in astronomy and especially star charts. He has contributed to many atlases, books and magazines. In 1993 a minor planet was named after him: (4648) Tirion = 1931 UE.