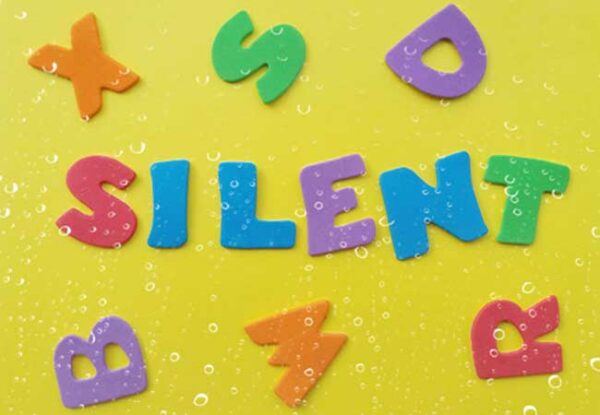 To pronounce or not to pronounce, that is the dilemma. English, like some other languages, has a number of letters which are ‘silent’ in certain words. The tricky thing is, knowing which letters can be silent, and learning when they should and should not be pronounced.

Let’s look at a few examples of words where each of the above letters is silent:

Often silent when it occurs before the letter ‘n’ at the start of the word, for example knee, knock, and knife.
Knock at my window at eight o’clock and I’ll be ready.

Another common silent letter, this time often occurring at the end of the word, for example, comb, lamb, and thumb. Other words with silent ‘b’ include debt and doubt.
She bit the tip of her left thumb, not looking at me.

Not pronounced before another consonant in certain words including calm, talk, and could. Note that the word colonel also has a silent ‘l’.
She is usually a calm and diplomatic woman.

Usually silent before the letter ‘n’, at the start of the word, as in gnat, or occurring within the word, for example, foreign, campaign, and designer.
Carolyne is a fashion designer.

Found in question words like why and where, other ‘wh’ words such as while, and by itself, for example, hour, honour, and heir.
They waited for about two hours.

Not pronounced in the combination ‘stle’, for example whistle, hustle and castle; some words containing in ‘sten’ such as listen and fasten; French words, for example, ballet and debut; plus a few other words like mortgage.
He was whistling softly to himself.

Never pronounced after the letter ‘q’, as in queue, antique and queen, but also silent with other vowels, for example biscuit, guest, rogue, and disguise.
He was wearing that ridiculous disguise.

Not too many examples of silent ‘s’, three of which sound almost the same – aisle¸ isle¸ island and debris.
A number of people were killed by flying debris.

When following letter ‘m’, the letter ‘n’ is often not pronounced, for example, autumn¸ column and solemn.
A final vote will take place next autumn.

When combined with various consonants, ‘p’ is not pronounced, for example, psychology, receipt, and corps.
I wrote her a receipt for the money.

Just a few oddities in this group – Wednesday, handsome, handkerchief, and sandwich.
On a Wednesday afternoon, the shop was shut.

So, to pronounce or not to pronounce? No real dilemma at all if you click on the playlists and watch the videos for the above words. Why not also check out our other playlists for help with other areas of difficulty in English spelling, grammar, and pronunciation?