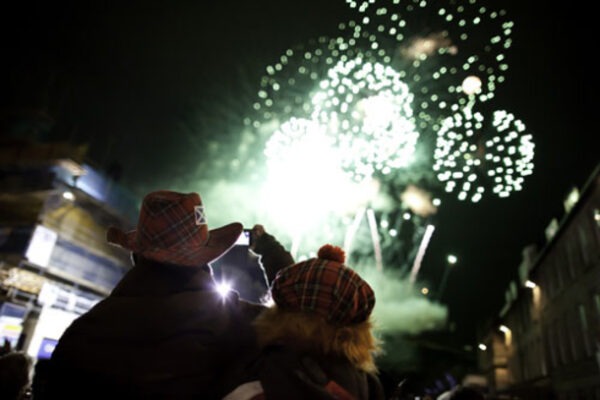 It’s almost time to bid farewell (or good riddance, either/or) to 2017 and give a warm, hearty welcome to 2018. It will doubtless mean partying, fireworks and celebrations the world over, and it’s fair to say that Scotland’s Hogmanay festivities are among the most vibrant and raucous you’ll find anywhere. Indeed, it wasn’t all that long ago that it was commonly considered the major end-of-year holiday for most Scots, rather than Christmas Eve or Christmas Day. With that in mind, here are some of the words and phrases that have become part and parcel of the nation’s way of bringing in the new year.

We’ll begin at the end by thinking about December 31st itself. Collins English Dictionary defines Hogmanay as “New Year’s Eve in Scotland and the celebrations that take place there at that time”.

There’s lots of debate about where the name “Hogmanay” originally came from: scholars have put forward all sorts of theories, claiming that it could have its roots in Scots, Gaelic, French or Norse. Collins suggests that it could be derived from the Norman French word hoguinane, used to refer to the last day of the year, and to the gifts that were traditionally requested and exchanged on that day.

While this is just one possible etymology, it certainly seems to tie in with a practice that was once widespread in Scotland: in the past, a common Hogmanay custom involved groups of children visiting their neighbours’ homes, sometimes in costume, and asking for sweets or fruit as treats. In return, they would often be expected to recite or sing a rhyme to entertain their would-be benefactors. So if the kids start to pester you for yet more selection box goodies, tell them they need to warm up their vocal chords first.

First-foot
The custom of first-footing may be familiar to many in modern-day Scotland and Northern England. Collins describes the first-foot (or first-footer) as “the first person to enter a household in the New Year”, and their visit is usually associated with bringing good or bad luck – the determining factors being the first-foot’s physical appearance and the gifts they bring to the house. Traditional gifts include black bun, a lump of coal, or a bottle of whisky (symbols of food, warmth and merriment). As for looks, any householder in search of good fortune ideally wants to see a tall, dark-haired man on the threshold – think Gerard Butler appearing at the door with a rather strange gift hamper, and you’re on the right track. A fair-haired man or woman is deemed to be bad luck; it’s a superstition that could well go all the way back to the Viking invasions of Britain, and a time where blond-haired visitors would possibly have been viewed with suspicion and mistrust.

Auld Lang Syne
Potentially a candidate for the Most Famous Song That No-one Can Ever Quite Remember – well, maybe beyond the first couple of verses – but there’s no denying this New Year anthem’s enduring appeal. Though it’s most closely associated with Robert Burns, versions of Auld Lang Syne (literally “old long since”, or “many years ago”) were in print prior to Burns’ take on it, first published some 220 years ago in the Scots Musical Museum collection. Burns’ own story was that he first came across Auld Lang Syne after hearing it being sung by an old man – we will never know for sure who this was, or even whether he existed, but the song he is said to have sung one night in the hearing of the Bard has certainly become famous the world over.

Auld Lang Syne has become inextricably tied to the celebration of the New Year; its entry in the Collins English Dictionary states that it is “a Scottish song about friendship that is traditionally sung as clocks strike midnight on New Year’s Eve”. While it’s unlikely Burns specifically set out to write a Hogmanay Number One, its themes of fellowship and reflection have led many to regard it as a fitting tribute to the end of one year and the start of a new one.

Up-Helly-Aa
OK, so it’s not strictly a New Year’s Eve tradition, but Up-Helly-Aa is a surefire way (if you don’t get the pun yet, you will in a minute) to banish the January blues.

Collins’ entry for Up-Helly-Aa describes it as “a midwinter festival held in January in Shetland; originally a fire festival, but now a celebration of Shetland’s Norse heritage, involving the ceremonial burning of a newly built Viking ship”. The festivities involve torchlit processions of guizers in Viking costume (guising), led by the Guizer Jarl (jarl), which culminates in the burning of a galley built to resemble a Viking long ship. The festival is a bright, lively homage to Shetland’s Norse links, and you’d be forgiven for thinking it dates all the way back to the Viking era – in fact, the first celebrations took place in the late 1800s.

Collins gives the name “Up-Helly-Aa” as a compound of the word “up” (in the sense of something being finished) and the Scots word “haliday”, meaning “holiday” – a reference to marking the end of the Yuletide period and all that it celebrates. If you’re looking to start 2018 with a bang, a blaze of light and, eh…a host of guys in Viking garb, then Up-Helly-Aa could be right up your street.

So now you know what to do in the unlikely (but not unwelcome) event of a certain Mr Butler showing up at the door with a bag of coal and a bottle of whisky in hand at five past midnight on January 1st…but however your new year gets underway, we hope it continues to bring you health and happiness. Bliadhna Mhath Ùr dhuibh – Happy New Year to you all!