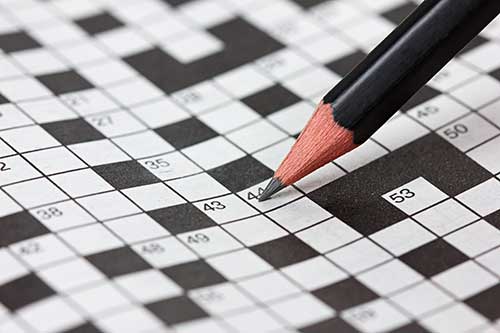 Bamboozled by crosswords? Here are our top ten tips to help you hone your puzzle-solving skills!

Crossword puzzles tend to be basically ‘quick’ or ‘cryptic’. A quick crossword usually relies on a one- or two-word clue which is a simple definition of the answer required.

Many words have different meaning, so that the clue ‘ball’ could lead to the answer ‘sphere’, ‘orb’, or ‘dance’. The skill to solving quick crosswords is working out which of these possible answers is correct. The best approach is to fill the puzzle in tentatively until your answers begin to interlink and you can be confident you’re on the right track.

If you do find yourself stuck, and you’ve tried thinking about the clue this way and that, then it may be the solution is simply a word you don’t know yet. Referring to a dictionary, thesaurus or other reference work is not cheating! Get hunting around in one and you’ll soon ferret the answer out.

If you don’t think puns are funny and have no time for riddles then you’re going to hate cryptic crosswords. But if you do have a sense of humour and don’t mind solving a puzzle then strap in for a party in your mind. Cryptic crosswords can be a lot of fun and all it takes to get into them is to learn a few of the ground rules.

The golden rule is that things are never as they seem at first sight. You need to have a devious mind if you’re to succeed. Take this example of a cryptic clue:

If you start thinking ‘tulip’, ‘daisy’ or ‘pansy’ then you’ve been led up the garden path (literally!). It’s really talking about a ‘flow-er’ as in something that flows. What flows through Glasgow? The CLYDE.

Cryptic crossword clues will usually fall into one of two kinds. The first is where the clue is made up of a cryptic definition (or definitions) of the answer, and nothing else. This very old joke is an example:

The answer? A NERVOUS WRECK

Or this one where two definitions of the answer are given together (just to keep things tricky):

The answer is SWEDE. A Scandinavian is a ‘swede’ and a ‘swede’ is also vegetable.

The second type of cryptic clue is where the clue contains a definition of the answer plus a wordplay on the answer. Most cryptic clues fall into this group. An early pioneer of cryptic crosswords (a man who went by the codename of Ximenes) said that to be fair to the solver this kind of clue should have three things:

The first challenge in tackling this kind of clue is to decide which part of the clue is the definition and which is the wordplay. You’ll find that this is a lot trickier in practice than it is in theory. The good news is that there are certain types of wordplay to look out for…

All the different sorts of wordplays in clues boil down to playing around with the letters of the answer. The trouble is that there are more than a dozen ways of doing this. Without a hint, it can be a nigh on impossible task to work out what you’re supposed to be doing.

To make things a little fairer, there is often a clue word within the clue itself to let you know what kind of game is being played. For instance, if you need to spell a word backwards to find the answer there will often be a word within the clue which means ‘in reverse’ (for across clues) or ‘upwards’ (for down).

If you think this makes it sound easy, beware! More than 2,000 different ways of telling you the solution is an anagram have been found to date…Remember, setters are masters in the art of saying the same thing a million different ways.

Anagrams are a classic type of wordplay in a cryptic clue. With these, the letters of one or more word in the clue have to be rearranged to give the answer. They will almost always be accompanied by a word or phrase letting you know the clue is an anagram. Anything that gets across the point that the letters of the solution are jumbled up in the clue will do. It could be ‘amended’, ‘different’ ‘reordered’, or (more indirectly) ‘cuckoo’, ‘nervous’ or ‘off’.

In this clue the anagram indicator is the word ‘wild’.

This is ‘wild’ as in ‘Wow! That was a wild party! Where am I?’ Read in that way, you can see why it means you should jumble up some letters. GANDER is an anagram of ‘danger’ and is a type of bird. Easy!

Crossword Tip #7 – A bit of this inside some of that

Another type of wordplay to look out for is where the solution has been broken down into two or more smaller words. It’s up to you to work out what these words are and then stick them back together to get the answer. For instance, the word ‘carton’ can be split in two to get ‘car’ + ‘ton’. Hence the clue:

‘Car’ is a form of ‘transport’ and ‘ton’ is a ‘great weight’. Put them together and you get CARTON, which is another word for a ‘container’.

Things get trickier when you not only have to stick two or more different words together but also have to put one inside the other. If the setter’s playing fair, they’ll give you a hint that this is what you need to do. It can be anything that suggests one thing surrounding another: ‘contains’, ‘encloses’, ‘bottles’, ‘bandages’, even ‘eating’!

Attempt to include tree in ornamental decorative pattern (7)

The clue word here is ‘include’. ‘Try’ means ‘attempt’ and an ‘acer’ is a kind of ‘tree’. If you ‘include’ ‘acer’ inside ‘try’ then you get TRACERY, which is an ornamental decorative pattern.

Homophones, words which sound the same another word but are spelt differently, crop up regularly in cryptic clues. If you don’t look out for them while hunting for the answer you’ll end up in the same predicament as the postman who can’t find his letters: having completely lost the ‘sent’! Here’s an example:

The answer is PEAR. A ‘pear’ is a fruit, while a ‘pair’ means two. ‘By the sound of it’ (when spoken out loud) they are the same. Again, the setter will give you a hint that there’s a homophone about. In this case it was ‘by the sound of it’. It can be anything that suggest the sound of a word: ‘said’, ‘reported’, ‘voiced’, ‘piped’ and on.

Anagrams are one way of hiding the answer in the clue. Others include hiding it in plain sight like this:

High temperature in the attic (4)

The answer is HEAT. ‘Heat’ means high temperature and it is also hiding in ‘the attic’.

A little trickier is when it is going backwards like this:

Anthropoid primate found back in the past. (3)

The solution’s APE. An ‘ape’ is an anthropoid primate but it is also found, backwards, in ‘the past’.

Trickier still is when you can only spot where the word is hiding by skipping out letters. The setter (if they’re in a good mood) will give you coded instructions within the clue of what you need to do.

Male creatures with bony appendages, even ones to be found in new lakes. (4)

The answer is ELKS. The definition part of the clue is ‘Male creatures with bony appendages’. The veiled instructions to solve the wordplay are ‘even ones to be found in’. That’s because if you only count the ‘even’ letters in ‘new lakes’, you get ‘elks’.

There are other types of wordplay that can be used in cryptic clues. Sometimes letters need to be swapped around with each other, replaced or deleted entirely. Abbreviations are also rife and learning the most common will help you out a lot. Remember that the setter will be fair and have left instructions about what to do. You just need to read the clue very carefully, never forgetting the golden rule: don’t be fooled into thinking the clue is straightforward.

The best way to improve at both cryptic and quick crosswords is to sit down and wrestle with them, time and again. Unless you’re a masochist, the only reason to do that is because you enjoy it. So take it easy, don’t feel too beaten if you can’t get all (or even half) the answers, and have fun. You’ll soon find yourself a diehard cruciverbalist: lover of crosswords.