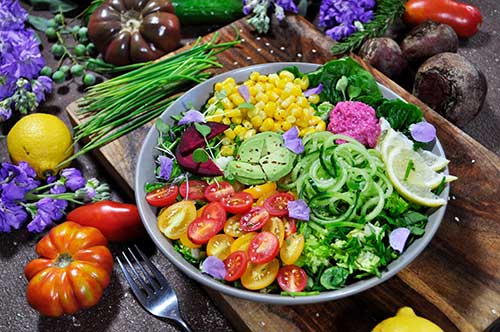 The words we use are a reflection of the times we live in. Historically, a lot of English words and phrases reflected the traditional occupations of farming, sailing, and soldiering. However, as the world became industrialized, words relating to ploughs, sails, and suits of armour have tended to fall out of general use. In their place we have had to invent words relating to things such as motor cars, aeroplanes, computers, and telephones, which did not exist before.

The latest wave of words to have been added to the Collins Dictionary continues to reflect our contemporary concerns, and this especially true with regard to words concerning the type of food we eat. As vegetarian and vegan diets have become more common, so new words associated with them have come into the language and the letter V is starting to occupy a larger proportion of the dictionary.

The words ‘vegetarian’ and ‘vegan’ are not themselves new, of course. ‘Vegetarian’ is first encountered in English in the 1840s, while ‘vegan’ was coined a century later by the animal-welfare advocate Donald Watson. Watson wanted a word to distinguish people who do not consume any animal products from other sorts of vegetarian. He chose a word formed from the first and last syllables of ‘vegetarian’, because he saw veganism as ‘the beginning and end’ of vegetarianism.

Towards the end of the twentieth century, a number of further words were invented on the model of ‘vegetarian’ to specify the particular diet pursued by an individual: a ‘pescatarian’ (coined in 1991) is a person who eats fish but not other types of meat, while a ‘flexitarian’ (first used in 1998) eats a mainly vegetarian diet, but doesn’t worry about the occasional sausage roll or chicken nugget.

The current decade has seen the addition of terms such as ‘plant-based’ and the more emotionally loaded ‘cruelty-free’ as adjectives describing products that do not involve the exploitation of animals. And the word ‘vegan’ has itself started to be used to generate new terms: we can now talk about ‘veganizing’ a recipe to make it suitable for vegans to eat, and trying out a meat-free diet for a month in ‘Veganuary’.

However, it may be that there is more to come. As consumers look for alternatives to the animal products that have formed part of our traditional diet, producers are coming up with some ingenious names for new plant-based options. You can now buy ‘sheese’ (sham cheese) and ‘tofurkey’ (tofu turkey), while a vegan product that looks like steak has been branded as ‘mheat’, and you can find various recipes for a meat-free ‘neatloaf’.