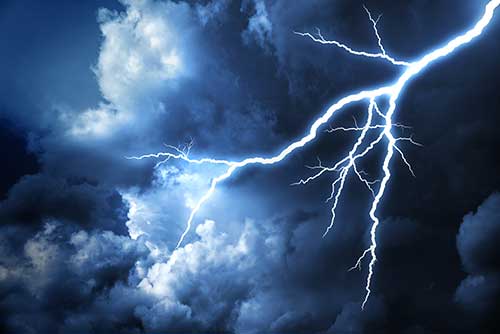 According to The Telegraph newspaper, talking about the weather is the ‘top British trait’ – a habit that dates back to when Julius Caesar blamed his failed invasion of Britannia on gale-force winds.

This obsession is unsurprising, given the unpredictable nature of the UK’s weather. In fact Britain’s skies are so changeable that even weather forecasters often get it wrong, none so eminently as Michael Fish on 16 October 1987.

“Earlier on today apparently,” he began, “a woman rang the BBC and said she had heard that there was a hurricane on the way. Well if you are watching, don’t worry there isn’t,” he said, reassuring millions of British viewers.

If Fish had been better informed, what he might have said was “Tonight there is going to be a serious hurly burly, something of a hig, accompanied by a huge kelsher“.

You see, Brits are so involved with our weather that we have even developed our own terminology! Take note of the below and brighten up your discussions of even the UK’s greyest of days.

A cold storm of hail and wind from the north in England. Many northern nannies hit the UK in the 17th and 18th century, during a period known as the Little Ice Age. This led to the Thames freezing over on several occasions, and when the ice was thick enough, as in 1620, giant carnivals called ‘frost fairs’ were held on the river.

In England, a heavy fall of rain accompanied by a high wind.

In 1955 a kelsher set the UK record for the most rainfall on a single day in a village called Martinstown in Dorset. Nearly 30cm of rain fell in 24 hours.

A particularly hot day in England. The hottest scorcher to hit the UK was at Brogdale in Kent on 10 August 2003, with temperatures reaching 38.5 °Celsius.

A dry, scorching wind of Great Britain and the Isle of Man: the sort of thing that might take place in St Osyth in Essex, the driest place in the UK which gets just 51cm of rain a year.

A slight fall of snow in the spring in England. The winter of 1947 was substantially more than this, as England’s snowiest winter. It snowed every day somewhere in the country between 22 January and 17 March.

A May storm in England (after the cows have gone out to pasture).

A sudden squall of rain or sleet in England. A squall, or sudden fit of tempestuous weather, is also called a blunk, and if it rains, a perry. In Scotland meanwhile, a squall is also known as a haud.

In English folklore, the 15th of July is thought to govern the succeeding 40 days; if it rains on St. Swithin’s Day, it will rain for the next 40 days.

There is also a St. Luke’s summer which, in English folklore, is a period of warm weather, similar to an Indian summer, occurring in October. If this happens in November, it is known as a St. Martin’s summer.

So now that you’re able to provide an alternative forecast, are we due a blunk brought on by a strong custard wind, or is a fowan bringing us a scorcher?