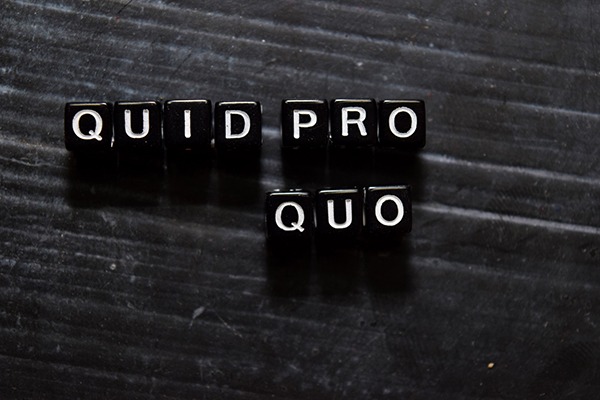 What does ‘quid pro quo’ mean?

Latin is a famously dead language, but it was busy enough while it was alive that echoes of it can still be heard in the modern world. One particular Latin phrase has been front and centre in the news recently as the impeachment enquiry into the activities of President Trump tries to assess whether he instigated a ‘quid pro quo’ by making American aid to the Ukraine conditional on the Ukraine investigating one of his political rivals.

The literal meaning of the phrase ‘quid pro quo’ is ‘something for something’. The idea is that person A does something (the ‘quid’) to help person B on the understanding that person B will do something in return (the ‘quo’) to help person A. In fact, ‘quid’ and ‘quo’ are both forms of the same Latin word, but Latin is an inflected language, meaning that the endings of words tend to change according to the grammatical role. After the preposition ‘pro’, the ablative form of the word (‘quo’) is required rather than the nominative form (‘quid’).

Latin was once regarded as a language of high status and was widely used in preference to English in such official circles as the universities, the law, and the church. As a result, many of its phrases have survived intact in modern English. We talk about doing something ‘ad nauseam’ (to the point of sickness), having an ‘alter ego’ (other self), feeling ‘compos mentis’ (sound of mind), or being a ‘persona non grata’ (person who is not welcome). Perhaps these phrases remain in use because no more elegant English alternatives have emerged; or maybe they have now become so much part of English that people no longer think of them as being Latin. But they seem reluctant to depart, remaining as ghostly presences of a language that has otherwise died out.

Look up quid pro quo on collinsdictionary.com to see it used in a sentence, or to find translations of the term into other languages, such as French or Spanish.