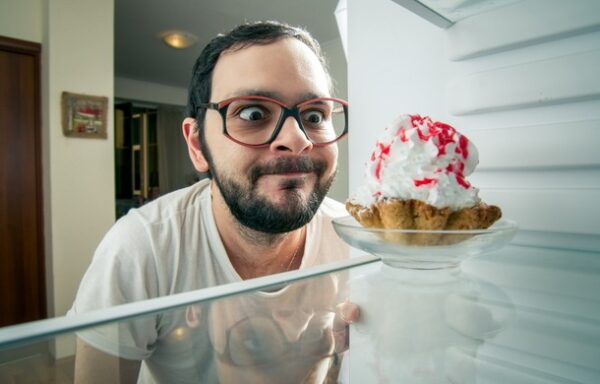 What is a womance, d’you think? A relationship between two Jonathan Ross impersonators? Between two fans of Womad? Two wombats? Alas, it is, according to its contributor Animan12 the most prosaic of portmanteaus and refers to a close but non-sexual relationship between two women. Modelled – presumably – on “bromance”, there is a monograph to be written by people with more time and sociological qualifications than me on how bromance came to be coined and gained (basically through the desire to mark close male friendships as Close But Definitely Not Gay, Though, while “womance” was a deliberate derivation from that and is unlikely – I’d lay odds – to catch on, because women have always been free to have friendships as close as they’d like without anyone getting twitchy about implications or definitions.

What a world, eh? Everywhere we are in etymological chains.

Anima12 also submits homme fatale, which may give us similar considerations running in the opposite direction.

Sticking with gender issues for a moment longer – contributor MelonyLiar gives us Marilyn meaning a hill or mountain in the UK, Republic of Ireland or Isle of Man with a prominence of at least 150 metres. I don’t know what they’re called elsewhere – though the 4,000 foot high Grand Teton in Wyoming’s name is French for “Large Teat” – but I suspect such wildly imaginative schema are to be found wherever lonely travellers have happened across such protuberances far from home.

AustinAllegro gives us hamdog which is, as the alert/hungry/innately optimistic about the innovative talents of mankind amongst you will no doubt have already discerned, a hotdog inside a hamburger (and suitable, perhaps, for Pivot’s submission – hypercarnivores; any creature whose diet is more than 70% meat. This includes owls, snakes, most sharks and all Texans). It is then – and I bet even the alertest, hungriest optimists amongst you won’t have got this – deep fried, put in a long roll, covered with chilli, topped with a fried egg and served with chips (or, as it’s mostly an American thing, fries). Just the sort thing you’re secretly hoping to find when you’re fridgesurfing (staring forlornly into the fridge, often late at night, hoping something delicious has magically appeared since you were last there, according to contributor Gorog) and never, ever do.

Maybe the thought of such tantalising, hypergreasy, hypercarnivorous delights across the pond is inducing a touch of misanglogy (contributed by BionicDan) in you. Or maybe you suffer from it all the time. As it means “hatred of English people”, I would quite understand either way. I am glad to have it to hand, anyway, in case I ever make a dent in my all-encompassing misanthropy and wish to cast my hate-net a little more narrowly. I don’t see it happening, but it’s good to have goals.

See you next time, if hamdog heart attacks don’t get us all first.