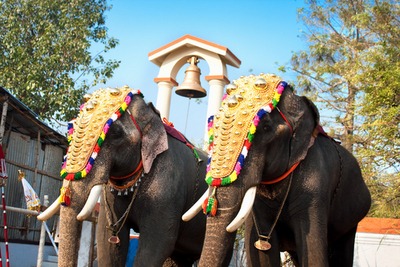 Hindi is a member of the Indo-European family of languages, which means that it is a distant relative of English. Sometimes people in India speak a hybrid tongue that contains words from Hindi and from English. This is known as Hinglish.

India and Britain down the years

Political, economic, cultural, and linguistic links between Britain and the Indian subcontinent (modern-day India, Pakistan, and Bangladesh) go back hundreds of years. The British were in India from the seventeenth century onward as traders, soldiers, missionaries, and colonizers. By the nineteenth century the subcontinent was known as the ‘jewel in the crown’ of the British Empire and Queen Victoria was crowned ‘Empress of India’.
Through Britain’s role as imperial administrator India inherited the English language (now spoken by more than 90 million people in India), the game of cricket, a civil service, and a railway network. In return, the colonialists borrowed extensively from the languages of the subcontinent. This means that many words picked up from Hindi are still in use in English to this day.

Some words in English from Hindi:

The subcontinent’s most popular export to the British Isles is undoubtedly its food. The soldiers and administrators of the British Raj had a liking for Indian food and a number of dishes and condiments were exported to Blighty (from Hindi bilāyatī meaning ‘foreign land’) during the Victorian era and after. As well as curry (a Tamil word), the colonialists brought back chutney and kedgeree and then, after Indian independence in 1947, immigrants from India, Pakistan, and Bangladesh introduced such delicacies as chapatis, samosas, and bhajis, to the British diet.

Sporting connections between Britain and India are very strong, and by far India’s most popular game is an English export: cricket. Some of India’s most famous cricketers are masters of spin bowling, and one recent type of spinning delivery that has been bamboozling batsmen around the world is the doosra. This delivery, bowled by an off-spinner, turns the opposite way from an off-break (an off-spinner’s regular delivery) and is a particular speciality of a new generation of spinners from the sub-continent. Although the doosra is far from straightforward to play its origins in Hindi are fairly unremarkable, meaning simply ‘other (or second) one’.

As well as doosra there are some other sport-related words from Hindi. In polo a chukka is a period of continuous play that generally lasts 7 ½ minutes, while someone considered an expert on a particular sport and who gets paid to talk about it can be called a pundit. This Hindi word originally meant a learned or wise person but the British adopted it into English and have been using it for around two hundred years.