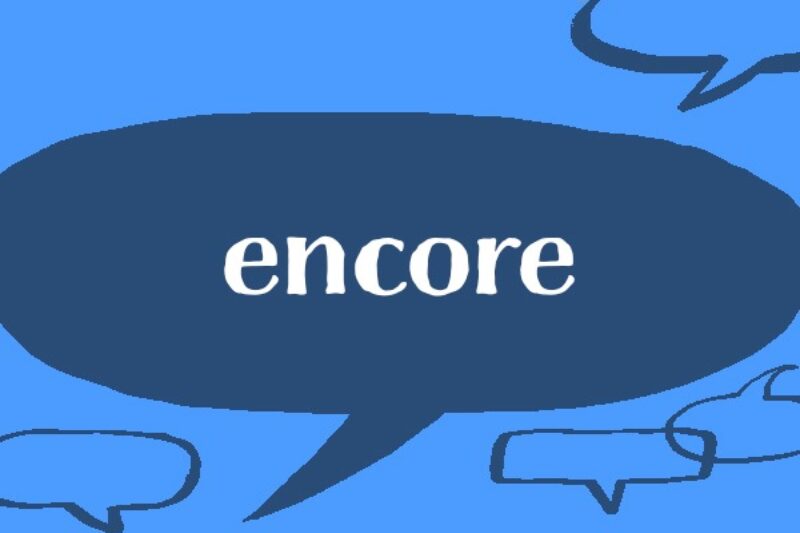 Welcome back. This week, we’re going to be looking at the word encore, which is a French adverb.

To hear how to pronounce it, you can listen to the audio:

Just to remind you what an adverb is, think of it as ad- from adjective, which is a describing word, plus -verb, meaning a doing word. Put them together and you’ve got adverb – a word that describes a verb or an adjective. Before we begin, you might want to read our Easy Learning Grammar pages on French adverbs to find out more about how they are used.

Now, what exactly does encore mean? If you’ve ever been to a concert, a play, or some sort of live event, you might have shouted this at the end of the show. In English, we use encore in this way to mean ‘do it again!’ or ‘we want more!’

The word originally comes from French – but you guessed it, it has a few different meanings. We will cover its two main definitions here.

Its primary meaning is much the same as its English equivalent. Encore can be used in French to mean again or more:

Tant pis, on peut y aller encore demain. Too bad, we can go there again tomorrow.

Its other common meaning is still:

Remember, we’re talking about an adverb, not an adjective. The adjective still in English might be used to describe something that’s not moving, or speak about ‘still water’ rather than sparkling. To refresh your memory about the difference between adverbs and adjectives, take a look at our Easy Learning Grammar pages on adjectives.

When you use encore in a negative context, it can be used to mean that you haven’t done something yet:

Vous avez visité la Tour Eiffel ? – Non, pas encore. Have you been to the Eiffel Tower? – No, not yet.

Thank you for coming along to read about our French word of the week – please come back next time for the encore!