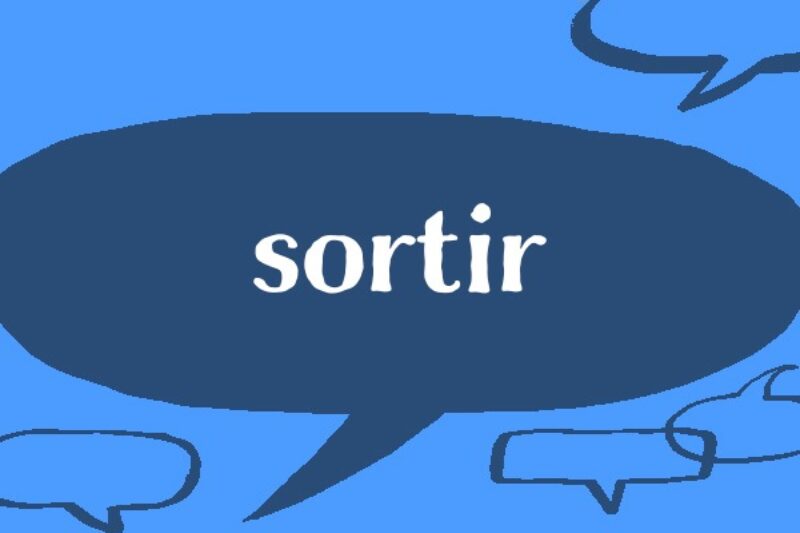 French word of the week: sortir

Welcome back, French learners. It’s time for our word of the week – the verb sortir.

If you’d like to hear how to pronounce it, listen to the audio here:

Sortir is an irregular -ir verb, but it does follow the same conjugation pattern as other similar irregular -ir verbs, like partir and dormir. Our French Easy Learning Grammar pages offer more information about forming irregular verbs.

But what does sortir mean? Sometimes we try looking at the word to work out its meaning through similar English words. In this case, you might think the verb could mean to sort.

Sorry, not this time! Sortir means to go out or to take out. There is one similar English term from a rather specific context – the military term ‘sortie’, which refers to an attack made by a military unit into enemy territory.

Let’s take a look at the French verb in action intransitively, where the subject is doing the ‘going out’:

Mon grand-père ne sortirait pas s’il pleuvait. My grandfather wouldn’t go out if it was raining.

Sortez de là ! Get out of there!

Now we’ll look at the verb in action transitively, where the object is being ‘taken out’ by someone.

Tous les jours à 8h, je dois sortir le chien. Every day at 8 o’clock, I have to take the dog out.

Je sortais ma clé quand il m’a volé le sac. I was taking out my key when he stole my bag.

It’s important to note that for the perfect tense, the conjugation of sortir changes depending on whether it’s being used intransitively or transitively. It can use the auxiliary verb être or avoir:

Clara ! Tu as sorti la poubelle ? Clara ! Did you take the bin out? (transitive, using avoir)

If you’re out and about in a French-speaking country, you’ll often see a related noun of sortir – sortie, meaning exit. It will almost certainly be in capital letters:

This week’s verb has some tricky grammatical rules to remember, but we hope it doesn’t make you want to head for the exit! See you again next week for another French word.