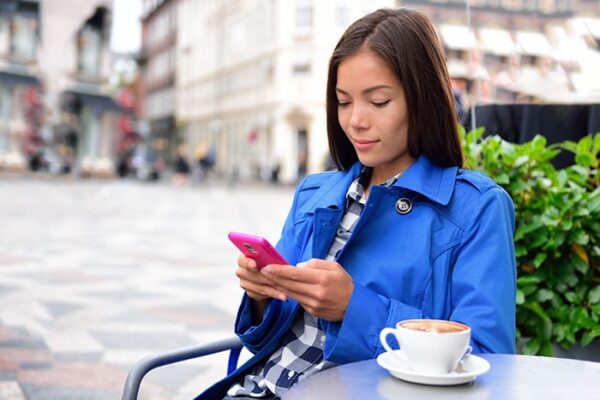 Texting in Spanish is based on the same premise as texting in English, in that the aim is to convey the desired message as concisely and quickly as possible. To do this – and to achieve the holy grail of using a minimum of characters – both languages use abbreviations and phonetic approximations to get the meaning across.

We can abbreviate a word as far as we dare without its meaning getting lost, usually by ditching unnecessary vowels. The shortened ‘uni’ is handy in both languages to express ‘university’ / ‘universidad’, but other abbreviations are language-specific: saying that you’re doing your shopping in a ‘sprmrkt’ is understandable in English, as is a ‘tnda’ (una tienda – ‘a shop’) in Spanish.

Both languages are helped by complete words sounding like an individual letter. Just as the English ‘you’ is expressed perfectly well as ‘u’, so the Spanish te can be reduced to ‘t’ and de to ‘d’. With certain words, we can make short sentences with a minimum of characters: ‘cu’ (‘see you’) or ‘tbo’ (te veo – ‘I see you’).

Other shortened forms in both languages use a combination of phonetics and vowel-crunching: ‘r u cmg’ (‘are you coming?’) and ‘q hcs’ (¿qué haces? – ‘what are you doing?’). The English texting question word ‘wot’ is even more concise when you’re texting in Spanish: ‘q’ is sufficient to express ¿qué?, but it’s increasingly common among young people to use ‘k’ instead. This signals an awareness, across the Spanish-texting world, of English sounds and words – i.e. it’s known that the English letter ‘k’ sounds a bit like the Spanish ¿qué?. English terms are also widely used in this form of Spanish: ‘ok’, ‘pls’ (‘please’, alongside other variants of por favor such as ‘xfa’ and ‘pf’) and ‘2’ (for the Spanish tú or tu).

As can be seen in the last example above, the incorporation of numbers can be very useful, too: ‘m8’ for ‘mate’ in English, and examples like ‘d2’ for dedos (‘fingers’) or ‘salu2‘ (saludos – ‘greetings’) in Spanish. The English 2, 4 and 8 are particularly useful in this respect, as are the Spanish 1 and 2. The Spanish indefinite articles un and una overlap with numerical usage for ‘one’, so you can easily say ‘qt1bd’ (que tengas un buen día – ‘have a good day’) or ‘m1ml’ (mándame un mensaje luego – ‘send me a message later’).