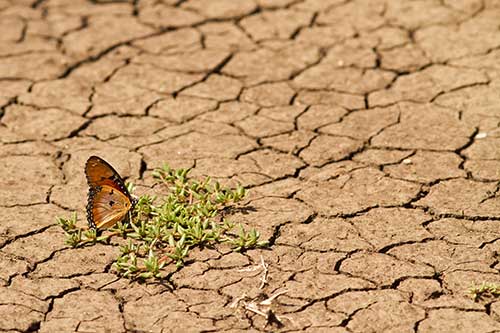 Climate can change naturally, but over the last century human activities have increased the concentration of greenhouse gases in the atmosphere. Greenhouse gases absorb and re-emit some of the heat radiation given off by the Earth’s surface and hence warm the lower atmosphere. The most important greenhouse gas is water vapour, followed by carbon dioxide and methane, and without their warming presence in the atmosphere the Earth’s average surface temperature would be approximately -20°C. While many of these gases occur naturally in the atmosphere, humans are responsible for increasing the concentration of many of them through the burning of fossil fuels, deforestation and other industrial and agricultural processes. We have also introduced new greenhouse gases, the ‘halocarbons’ such as chlorofluorocarbons (CFCs), which have also damaged the ozone layer in the stratosphere. Although carbon dioxide is released naturally by volcanoes, ecosystems and some parts of the oceans (for example the central Pacific), this release is more than compensated for by a larger uptake by plants and by absorption in other ocean regions (for example the North Atlantic). Had these natural carbon sinks not existed, carbon dioxide would have built up twice as fast as it has done. Records of air bubbles in ancient ice show us that carbon dioxide and other greenhouse gases are now at their highest concentrations for more than 800 000 years.

The rise in atmospheric greenhouse gases has increased the global average temperature by over 0.9°C since 1960. This warming is observed over the oceans as well as over land, suggesting that it is a truly global phenomenon and not a conglomeration of ‘local’ increases in temperature caused by some small-scale process such as the urban heat island effect. The Fifth Assessment Report (AR5) of the Intergovernmental Panel on Climate Change (IPCC), published in 2013, concluded that the evidence for climate change is unequivocal and there is very high confidence that this warming is due to human emissions of greenhouse gases.

Climate models bring together the vast array of understanding of the Earth’s atmosphere, oceans and life and represent physical, chemical and biological processes in the form of mathematical equations. These models suggest the global mean surface temperature could rise by between 2.8°C and 5.4°C by the end of the 21st century depending on how much more greenhouse gases we put into the atmosphere. Sea level is projected to rise by between 52 cm and 98 cm by 2100, threatening coastal cities, low-lying deltas and small islands. Extents of snow cover and sea ice are projected to continue to reduce, and some models suggest that the Arctic could be ice-free in late summer by the latter part of the 21st century, threatening species that rely on cold habitats. Heat waves, extreme rainfall events and flash flood risks are projected to increase, posing potential threats to health, ecosystems, and human settlements and security. Even if global greenhouse gas emissions were to be cut immediately, there would still be some level of ongoing warming for decades and some sea level rise continuing for centuries, because the climate system is slow to respond fully to imposed changes.