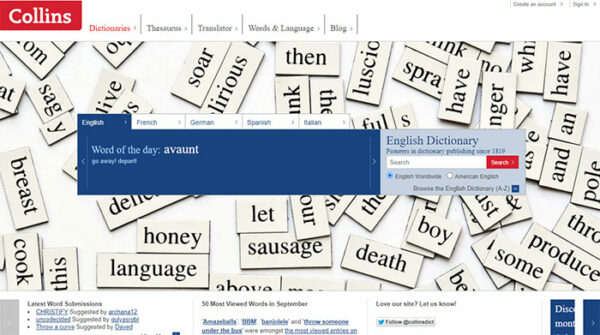 Collins Dictionary: Some Criteria for Inclusion

We regret that we cannot enter into detailed discussions of why individual suggestions for the dictionary are accepted or rejected. However, to guide you when you make submissions, please note that certain categories of word may not meet our criteria for inclusion.

1. Gratuitously offensive slang terms
While there are some common slang, taboo, and offensive terms listed in the dictionary, there is a limit to the amount of slang that we can include in a general-purpose dictionary and still keep a balance. We are especially likely to be circumspect about including any terms of a sexual nature or terms that could be considered gratuitously offensive

2. Names of commercial brands, people, organizations, places, etc
There are some proper names included in the dictionary, but these must meet certain criteria. Trade names and brand names are only included when they are commonly used as though they were generic terms (eg Levi’s) or when they also acquire additional meanings or grammatical usages (eg Google). Names of people, places, and organizations are included only when they are deemed to be of special cultural significance. We are therefore likely to reject proper names that do not meet these criteria.

3. Phrases whose meanings can be determined from the literal meanings of the words
We are only interested in listing multi-word phrases in the dictionary when they are ‘idiomatic’ (that is to say, they use at least one of the words in a non-literal way to create a sense that could not be deduced from the basic meanings of the words). So an expression such as ‘part of the problem, not part of the solution’ is not of interest to us because no reader who understands the meanings of the individual words would fail to understand it; on the other hand, an expression such as ‘be singing from the same hymn sheet’ is of interest to us because the meaning cannot be understood from the literal meanings of the words. Please also note that we are not interested in phrases that use metaphors that are already covered in the dictionary, so we would not be interested in an expression such as ‘not my bag’ or ‘what’s your bag?’ because this metaphorical sense of ‘bag’ as ‘a person’s particular taste, field of skill, interest, activity, etc’ is already defined under that word.

Words of very low frequency and limited currency
We are keen to receive all kinds of suggestions for words to add to the dictionary and we give careful consideration to each submission. Unfortunately, we can only include a limited number of the suggested words as new entries every year. The physical size of a printed book has traditionally limited the number of words that we can include. Although an online dictionary is not limited by physical size, the process of expanding the dictionary is a gradual one, and our current priority is to select new words that meet or come close to the standards for inclusion already established for the print version of the dictionary. Lexicography is not an exact science, but the editors look at objective evidence and take the following into account when deciding whether there is enough evidence for a word to be included:

However, the English language is constantly developing and the frequency and currency of words is likely to change over time. If you have submitted a word that is not selected for inclusion you are welcome to draw our attention to any evidence that shows that the word is becoming used more frequently, more widely, and over a longer period than we have been able to establish.