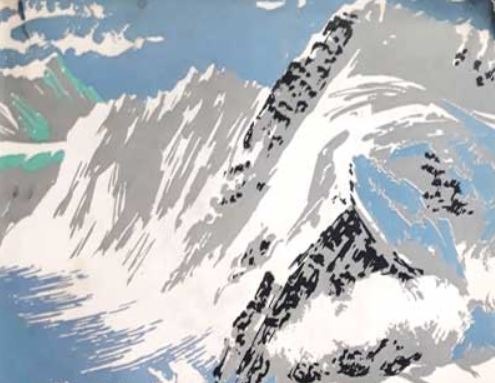 From the Archives: The Cloak and Dagger Expedition

Here at the HarperCollins Archive, there are many accounts written by explorers of vast deserts, climbers of the highest peaks and survivors of treacherous seas. This month, we are shining the spotlight on the three mountaineers who formed the first ever female-led expedition in the Himalayas. Their names are Monica Jackson, Elizabeth Stark and Evelynn Camrass, and their story is told in the self-authored Tents in the Clouds.

Jackson, Stark and Camrass met as members of the Ladies’ Scottish Climbing Club, an organisation that has been running since 1908 and is the oldest active climbing club for women. The idea for the expedition came from a lecture given by Jackson about her positive experiences working with Sherpas, the native people of the Himalayas who act as guides during expeditions. The women pooled their resources and began to plan extensively, seeking advice from others who had climbed in the Himalaya. They anticipated opposition, hesitation and outright prejudice along the way.

‘If we slipped up and so got into trouble, there were plenty of people who would say, “These women should never have been allowed out in the mountains on their own.” We did not mean to give them the chance.’ – Elizabeth Stark

But, after a great deal of negotiation, the expedition was given the go-ahead, and in the spring of 1955 the group of three sailed to India, flew in to Kathmandu (the capital of Nepal) and began their exploration of the Jugal Himal, at the time an unexplored, mostly unmapped region of the Himalaya. Their journey was not without risk: they trekked through gorges and glacier valleys, navigated dangerous crevasses and climbed icefalls that could shift at any time. But the team managed to complete their expedition with no casualties whatsoever.

The highlight of the expedition is perhaps the ascent of a 22,000 ft mountain. Before the expedition, it was unmapped and unnamed, but they climbed without supplementary oxygen, reached the peak and returned to the camp in one day, with only a few near-misses with death along the way. Upon their triumphant return, they named it Gyalgen Peak. 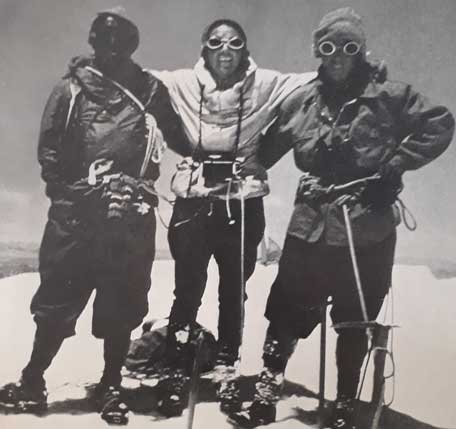 Monica Jackson, Elizabeth Stark and Evelyn Camrass on the summit of Gyalgen Peak.

It is important to give credit to Esmé Speakman, the fourth member of the expedition. Though an unfortunately timed illness prevented her from going on the expedition, her presence is pervasive throughout the book. And why shouldn’t it be, when she is the very person who brought the group together after meeting Monica in the French Alps? Tents in the Clouds is solely dedicated to her.

The expedition made headlines at the time, but these women didn’t set out for fame or recognition. They didn’t even set out to prove that an all-female expedition was possible. They made this journey above the clouds out of sheer curiosity, a love and respect for the wildest parts of the earth, and most importantly knowledge and appreciation for the art of mountaineering.
‘It was the days of strenuous endeavour we spent on the high ridges, glaciers and snowfields of the Jugal that will remain forever in our memories as not only the happiest, but also, strangely enough, the most serene and peaceful days of our lives. Up there, each moment was sufficient for itself, and the world pressed upon us not at all.’ – Monica Jackson