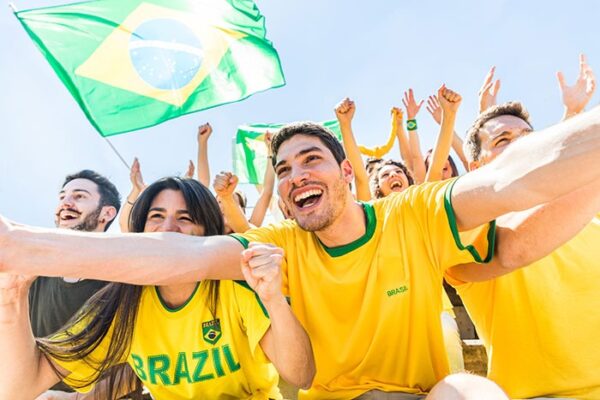 World Cup Words You Need to be Brilliantly Brazilian

Although England are no longer involved in‘a Copa do Mundo 2014’ in Brazil, there are still plenty of reasons to get excited about this festival of football.

With that in mind we have compiled a need-to-know list of Brazilian terms to allow you to follow the beautiful game like a local ‘na hora da onça beber a água’ – ‘the time that the jaguar drinks water’ or the decisive hour.

Brazilian football is said to have a language of its own, with a defender as a ‘beque’ and a corner as an ‘escanteio’, and the likes of Beckham and Pele as the ‘craque’ . This term for the ‘star player’ derives from both the English ‘crack’, which once meant your best soldier, and the better-known term ‘crack horse’ – a full thoroughbred. Incidentally, Rio’s Maracanã Stadium was built over a horseracing track.

To ensure that you understand who is the ‘craque’, who is ‘mascarado’ (masked, deceiving) and who has a ‘perna de pau’ (wooden leg) this summer, read on:

1. Brazilian futebol is controlled by the CBF, or Confederação Brasileira de Futebol, and played at national level by Seleção – who are also nicknamed ‘A Verde e Amarela‘ or ‘O Verde e Amarelo’.

2. Amongst your team you should have at least one of the following: a goleiro, a defensor, a zagueiro, a lateral-direito, a lateral-esquerdo, a meia, volante (a defensive midfielder – or, literally translated, a steering wheel), a meia-atacante, a meia-armador, an atacante, a ponta-de-lança, a centroavante, and finally a camisa dez. In Brazil, the Camisa dez is traditionally worn by and used to refer to the central attacking midfielder; wearers have included many greats such as Ronaldinho, Zico, Raí, Kaka and Pele.

3. South Africa 2010 had the vuvuzela; Brazil 2014 has the caxirola (pronounced ka-shee-role-ah) which is a smaller, louder, recently bannedpercussion instrument. As this instrument has become unpopular with Brazil’s ministry of justice, you might find the diabolica this year’s trumpet of choice – a collapsible, less deafening version of the vuvuzela.

4. Why not try a game of futsal to get you into the competitive mood? You’ll only need four friends, five opponents and a few friendly Cariocas to cheer you on – and to assist anyone who is unlucky enough to become ferido. After you’re tired out, why not indulge in a delicious BBQ style rodízio – and don’t forget the ice cold cerveja.

5. If male fans are hitting Brazil’s infamous white sands (and feeling brave) they may opt for a bro-zilian. In fact, a bro-zilian is a near necessity if you’re sporting a sunga (although chances are, not many British fans are quite brave enough for this!).

6. Don’t be alarmed if you spot a Brazilian three-banded armadillo on the pitch, this is just Fuleco – Brazil’s cheerful mascot, who loves to dance to Brazilian music.

7. Shoot the bola into the gol several times and you’ll achieve a ‘Goleada’; score straight off a corner kick and you’ve got yourself a ‘Gol Olímpico’; head it into the net after diving and sliding on your stomach and that’s a ‘Gol de Peixinho’ – not to mention two bruised knees.

8. Chute and you’ll perder, bater pro gol and you might just vencer. Congratulations, you’re an Artilheiro!

9. Be shown the cartão vermelho during a significant jogão and you’ve ruined your team’s chances of achieving a true game of futebol arte or jogo bonito.

Ronaldinho recently said, ‘You can’t understand what the World Cup means to our country.’ Well perhaps we can’t, but we hope that you can at least now understand how to say “World Cup” in Brazil.

Let us know how you get on, and we hope you enjoy following the Copa do Mundo over the coming month!