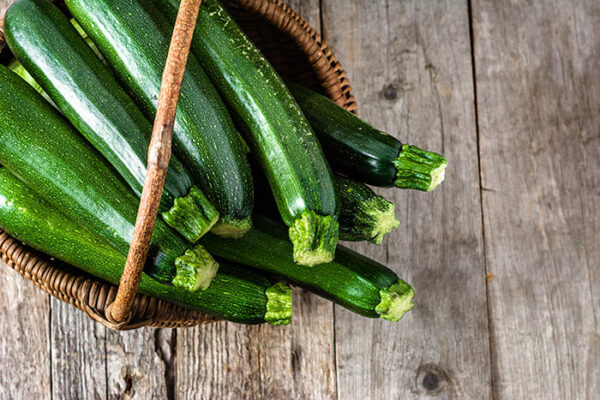 Brits and Americans often have no trouble understanding one another. However, there are still a few words and phrases that remain completely unalike.

These are called biscuits in the UK. Cookie in US English comes from the Dutch koekje, a small crisp cake. Dutch settlers in New Amsterdam (now New York) were given these by Sinter Klaus (Santa Claus), who brought them all the way from Amsterdam at Christmas.
What Americans would call a biscuit is very similar to the traditional English scone, whose pronunciation (“sc-on” or “s-cone”) the British continue to argue amongst themselves!

What’s more, Brits take jam (that’s jelly in the US) and cream with their scones, so attempting to order an American diner breakfast of “biscuits and gravy” is likely to leave any English café completely mystified!

This vegetable is called a courgette in the UK. Both words mean “the little squash”, but the US word comes from Italian and the British from French. Similarly, an eggplant is called an aubergine in the UK. The American yam is not commonly found in the UK, yet the term is often used in the US to refer to what the British call a sweet potato; the Brits eat theirs roasted (as they do most things) and have not yet warmed to the American dish of “marshmallow yams.”

“Are you mad?” may be an American way of simply asking whether someone is annoyed, but in Britain translates as “are you insane?” or “crazy?” You have to use cross or angry in Britain, if you don’t want to be sectioned (committed to an institution).
This is similar to asking if someone is pissed: an American may be surprised at why you’re asking them whether they’re irritated, or mad; whilst a Brit might be rather offended at being asked if they are intoxicated, tipsy or sloshed.

British job applicants may start by updating their CV (or Curriculum Vitae, Latin for “course of your life”), which is a more detailed document than an American résumé. The US word comes from the past participle of the French resumer, which means “to summarize” and “to resume”. Once in employment, Brits might feel the need to take a holiday (vacation), yet if they take too many of these it could lead to them “getting the sack” (fired or laid off).

This past participle of get died out in UK English around three hundred years ago. In the UK it’s now just got. Get is used a lot more in Britain than in the US, so prepare to hear “I’ve got” for “I have” a lot; for example “I’ve got to go to the loo” replaces “I have to use the john” – a phrase which will leave most Brits questioning what’s so important about John and his possible uses.

Realtors are called estate agents in the UK and are just as distrusted as their American counterparts. In addition, the words attorney and lawyer are uncommon in Britain. Instead, the British make a distinction between a barrister – a lawyer qualified to plead cases in court from the bar, and a solicitor – a lawyer who gives legal advice from behind a desk.

In Britain, a first-year university student can be called a fresher or first-year, but never a freshman. Sophomore, junior, and senior are not used at all. Even fresher never applies to “high school”, which doesn’t really exist in Britain, and is replaced by primary and secondary education.

Brits make a clear distinction between “school” and university or “uni”, so if you ask a British person where they “went to school”, they will probably wonder why you’re so interested in their childhood.

This means the British use the phrase “full stop” the way Americans would use “period”: “He’s a liar. Full stop.” Fortunately a comma is the same on both sides of the Atlantic, though the Harvard comma is unsurprisingly called the Oxford comma in the UK.

This is just called a crossing in the UK. Since cross means “angry” in Britain, overly literal Brits may think a crosswalk sounds like an “angry path”. Still, while the British may think American crosswalks sound a little stern; Americans may be surprised by the eccentric nature of British crossings which range from Zebra to Pelican, Toucan, Puffin and Pegasus. Also, a US sidewalk is a British pavement, and curb is spelled kerb (curb in UK English is a verb i.e. to “curb your enthusiasm”).

This is called petrol in the UK. Even better, the hood of your car is called the bonnet. Isn’t that cute? And the trunk is called the boot. If the chassis were called the pinafore (it isn’t), then we’d have a complete outfit.

So there you have it. And we even resisted the whole fanny and pants dangerzone. We’ll leave you to explore that one on your own!

What other North American or British English words have caused you confusion or entertainment in the past?