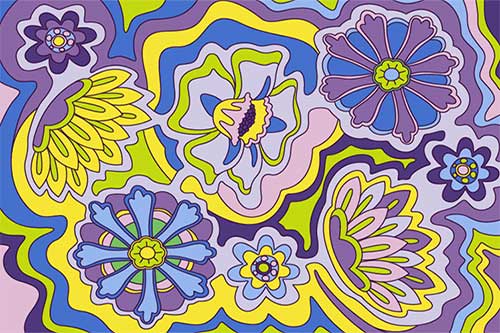 The 1960s saw a boom in space exploration, with humans finally travelling to and experiencing the wonders of the regions beyond earth. But which words were flourishing in this revolutionary decade?

Naturally, advances in space flight brought some previously specialist vocabulary into general use. We made acquaintance with previously unfamiliar terms such as liftoff, LEM (a lunar exploration module), space probe and splashdown. Such jargon was even given its own name in the 1960s: the delightful spacespeak.

The space race was not the only phenomenon driving new vocabulary in the sixties. The counterculture that rejected post-war social norms brought us the hippy, flower power and psychedelia. The savagery of military conflicts in Vietnam and elsewhere gave rise to the peacenik, while battles fought at home were bringing the terms Black Power, Women’s Liberation and the nascent Gay Pride, fuelled by reaction to the Stonewall riots of June 1969, firmly into public consciousness.

And how does our language today compare to that of the 1960s? Of course, technical vocabulary has developed considerably since an era where social, mobile and swipe would mean something quite different from our associations today. However, the fast-paced world of slang demonstrates equally remarkable change. You might have bare people at your lit party with the bangin’ tunes today, but fifty years ago, you might have had friends à gogo at your swinging party with the groovy sounds.

It is funny to think that with-it terms from this ground-breaking era could raise a chuckle now. But in fifty years’ time our contemporary slang, even if it is snatched, could raise a response of LMAO – or whatever the word of the moment may be!