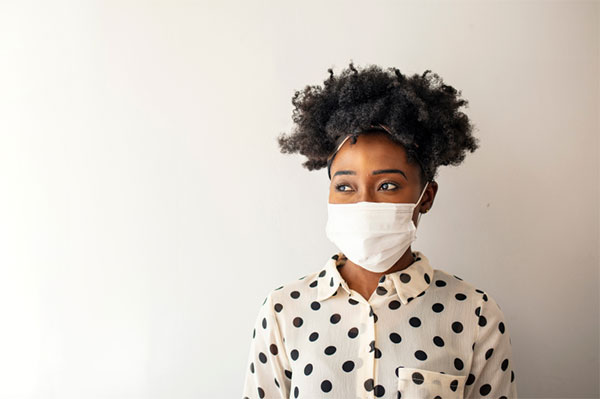 Think of masks and what comes to mind? Does your subconscious link them to glamour and derring-do…or pleasure…or even terror? Perhaps some mythical swashbuckling character from film or fiction …Zorro, the Lone Ranger, even Batman or Robin. Or something more sinister, like Hannibal Lecter?

Whatever their associations, getting used to seeing them and wearing them – or a ‘face covering’ – is something we now all have to do.

For glamour, there’s no mask more alluring than the domino mask of Zorro et al., masking only the eye area and bridge of the nose. If ever a face covering could be heroic AND chic, let’s face it, that is it. First, there’s its never-dated black on a par with Chanel’s little black dress, or LBD. Then, half-covering a handsome or beautiful thespian visage, its snug-fitting softness highlights the wearer’s features and disguises while not fully disguising: it gives the wearer that childish sensation of ‘you can’t see me because I’m hiding, but I can see you’. Small wonder, then, that Donald Trump suggested that when he donned a black mask he looked like the Lone Ranger. Though someone unkind might surmise he was muddling his orifices.

Of carnivals and kings

The domino mask is a cliché of modern Venetian carnivals. What goes with it is the black domino cloak with hood, originally intended to conceal the wearer’s clothes for the carnival masquerade, a masked ball where everyone is in disguise. Possible origins of that ‘English’ word masquerade include the Italian word for ‘mask’, maschera, as in Verdi’s opera about a royal assassination at a masked ball, Un Ballo in Maschera.

Of course, you might put on a mask to disguise yourself for nefarious reasons, which is why one meaning of masquerade is ‘a pretence’, as illustrated in the Collins COBUILD dictionary example ‘…the elections would be a masquerade.’ And the verb to masquerade is always negative.

As for ‘mask’, it has a mixed heritage. Some sources link it ultimately to the Arabic maskharah ‘clown’. Less distantly, it is influenced by French masque, the spelling retained for the courtly theatrical pageants loved by the royal court in Shakespeare’s day. Shakespeare is the first to use it for an actor’s mask, spelled maske, in A Midsummer Night’s Dream (1600).

Neither phantom nor opera

Of course, neither theatricality nor deception underlie the COVID use of masks. In fact, the various UK governments’ guidelines talk of ‘face coverings’, which is a more elastic category including religious coverings. That phrase also gives an alternative to people who don’t possess masks and removes the potentially negative connotations of the word mask. Some people have been affected by mask-induced acne, maskne, a blend almost as ugly as what it denotes, while those who refuse to wear masks might be euphemistically described as maskholes.

The alternative title for this post was ‘If you don’t mask, you don’t get’. The self-explanatory idea is that if you don’t wear a mask where it is obligatory – or should that be ‘mandatory’? – you won’t be served and won’t get what you needed.

It’s a neat pun used by Banksy as the slogan of his guerrilla artwork on the London underground on 14 July, art promptly removed by TFL as mere graffiti. Talk about looking a gift rat in the mouth.