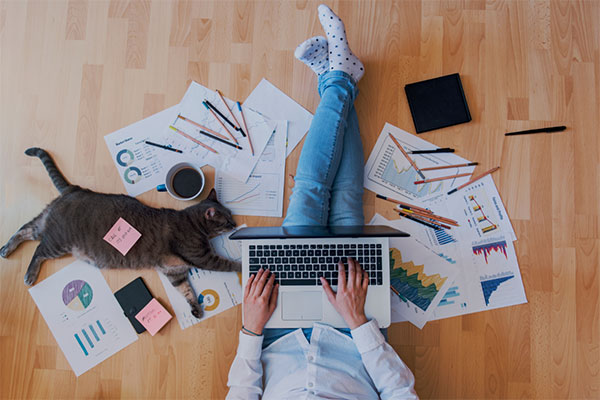 It’s tempting to suppose that if you’re working from home (WFH) what to wear is a non-issue, but experience during lockdown has knocked that presumption on the head. The distinction between WFH before coronavirus (BC) and after (AC) is that a subcategory of clothing has been brought into focus, literally. What you wear in the part of you visible to interlocutors in internet-mediated meetings is crucial to projecting your image. In essence, because people are generally seated, anything from the waist upwards matters, anything below it doesn’t – unless you accidentally stand up, in which case your sartorial centaurdom could be cruelly unmasked. In fact, there are tales on Twitter of an apparently suited and booted man who got up to move his dog and thereby revealed he was in his birthday suit from the waist down.

That apart, let’s face it, if you’re anything like me and see a man wearing a jacket and shirt (going tieless seems de rigueur these days) while on camera, a) he will zoom up in your estimation because he’s made an effort and b) you won’t suspect him of harbouring jimjams and bunny slippers out of camera range. It’s a win-win all round. There’s a nice pun to describe public clothing during confinement: infits. Alternatively, there is that addition to the -wear family in the shape of upperwear. Curiously, the novel phrase #zoommullet, does not, unlike the original mullet hairstyle, refer to your thatch but to your upper half being dressed for business and your bottom half for partying.

Talking of hair, I don’t know about you, but rather than angsting over what to wear ‘on top’, I’m more troubled by how my barnet looks. It’s nearly three months since the barber sheared it and my long-suffering partner has hacked away as best they can, but there’s simply nothing like the real thing in coiffuring. Instead, I’ve got a down-to-earth #Coronacut.

But trichology and togs are not the only things under the figurative WFH spotlight. “The camera never lies,” but it can certainly misrepresent. There’s often a bit of a problem with camera angles in videoconferencing: the person’s face may be shot from below, thus potentially revealing all manner of horrors, from incipient wattles and dangling dewlaps, to male nostrils like the entrance to a badger’s sett. Not to mention a phizog with an unhealthy pallor or a disfiguring oily sheen of anxiety. Only a day or so ago, I took part in my first virtual yoga class, which involved a lot of floor exercises. When I checked with the teacher at the end how visible I’d been, she said, “Well, I got a good view of most of your head and the ceiling.”

Just as important to your desired screen impact are your surroundings. For sceptics like me, credibility is instantly blown sky-high if, as has happened, someone broadcasts from a hastily tidied kitchen with books plonked unaesthetically on the window ledge. Concerns with image-enhancing background can lead to zoom rooms being set aside and kept pristine precisely for the purpose of video calls. Alternatively, people are tempted to indulge in competitive bookshelving. Or they can even download Zoom’s virtual backgrounds to present a stylised, fictitious image of their surroundings.

In any videoconferencing, my main concern is how to hide the coronaspeck I’ve put on since being locked down. Speck is German for “bacon” and informally for “flab”. Coronaspeck denotes the lockdown pounds piled on by obsessive, non-stop grazing at home. Time to try out a few of those new yoga asanas – but not the headstand.