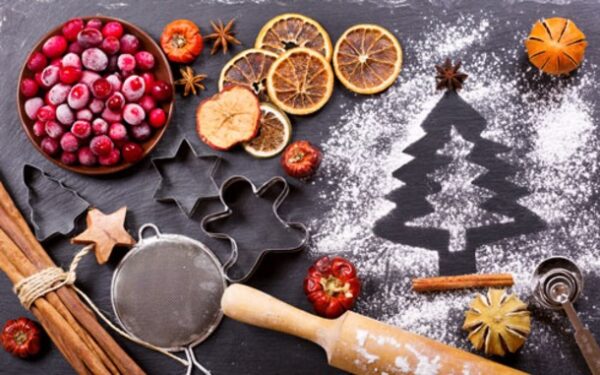 It’s the most wonderful time of the year! From wassailing to jolly Kris Kringle, the holiday season comes with its own festive selection of words and phrases. Dig into the true etymological meaning of Christmas, plus five more festive word treats to mull over.

As you may have guessed, Christmas is rooted in Christianity. It’s from the Old English Cristes mæsse, meaning ‘Christ’s mass’, in the sense of Jesus Christ, who is celebrated as being born on Christmas day, and a religious mass.

You may also wonder why most people wish a ‘Merry Christmas’ as opposed to ‘Happy Christmas’. Some have argued that it’s based on your region, for example, Brits may prefer to say happy whereas Americans favour merry. Another theory is that happy is an emotional state, whereas merry connotes certain behaviour – a Christmas state of mind, if you will.

A somewhat antiquated word to add to your festive repertoire this Christmas, wassail is in the lower 50% of commonly used words according to Collins Dictionary. However, this word is a multi-functional yuletide treat!

Deriving from Middle English wes hāl, meaning to be hearty, wassail can be used to describe all manner of Christmas activities. Some examples are: a toast or salutation, the singing of Christmas carols, spiced beer or mulled wine and even ‘a festivity when much drinking takes place’ (here’s to you, office Christmas party!).

Everyone’s favourite international man of mystery goes by many names: Saint Nicholas, Father Christmas, Kris Kringle, Papa Noël, Santa Claus. Where do they all come from?

Father Christmas may be more familiar to UK audiences, emerging as the modern personification of Christmas. Prior to the Victorians, his main concern was adult feasting and merry-making, but he was re-branded in the 19th-century as a gift giver when Christmas became more child-centric.

Santa Claus is a corruption of Saint Nicholas (from the Dutch Sinterklass), the patron saint of children. The origin of the Santa Claus story is believed to stem from Saint Nicholas, the Bishop of Myra born in the 3rd century, whose legendary habit of secret gift-giving spread far and wide. Saint Nicholas is honoured on December 6th, the day of his death.

We all know the story, poor old Rudolph eschewed by his fellow reindeer before being hand-picked by Santa to be chief sleigh-driver. But did you know that Rudolph literally means ‘famous wolf’

Furthermore did you know that the rein- in reindeer is derived from the Old Norse hreinn, meaning ‘horned animal’, particularly an animal whose horns rest atop its head. Clearly we wanted to get straight to the point when we discovered these majestic beauties.

Nothing says Christmas like the subtle twinkle of tinsel, adorning your Christmas tree or casually draped around your shoulders if you’re feeling extra festive. These days tinsel consists of small strips of shiny paper attached to thread, but once upon a time it contained threads of gold and silver.

Interestingly the word tinsel stems from the 16th-century Old French estinceler, meaning ‘to sparkle’ which itself derives from the Latin scintilla, ‘a spark’. Depending on how decadent you felt back then, you could buy tinsel made of real shredded silver! Sparkly indeed.

According to the dulcet tones of Cliff Richard, Christmas time is for mistletoe and wine. Kissing under the mistletoe is peak holiday #goals for the hopeless romantics. We’re sorry to ruin it for you, but the etymology of mistletoe will make the idea a lot less appealing.

No point in beating around the holly bush, mistletoe finds its etymological root in bird poop, which is how the Anglo-Saxons believed the plant was fertilised. Foraging birds would explore the foliage and eat the mistletoe berries, which they would later excrete, scattering the mistletoe seeds in new areas. Still fancy that smooch under the dung twig? Probably not.

Looking for more seasonal wordplay? Take a look at our etymology corner blog, which examines the origins of favourite festive treats such as eggnog, hot toddy and regmaker. Merry Christmas!