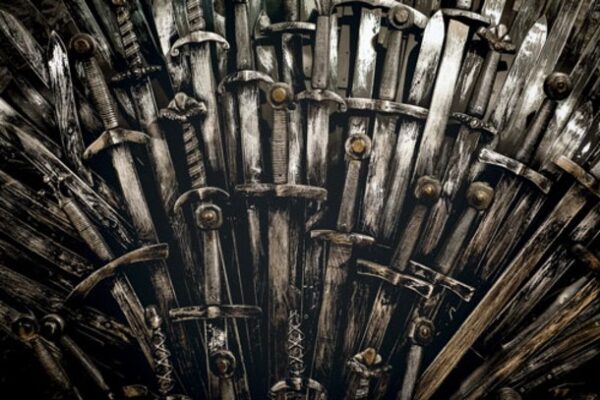 ‘Wights’, ‘maesters’ & more: The etymology of Game Of Thrones

Winter is finally here. As our favourite characters are pitted head-to-head in the latest season, we decided to explore the etymology behind Game Of Thrones’ most popular words and phrases.

Hand of the King

‘What the king dreams, the Hand builds’ – Eddard Stark

We’ve had a few Hands of the King so far, from the ill-fated Eddard Stark to everyone’s favourite Lannister lion, Tyrion. The Hand wields extensive power in Westeros and is considered to be the monarch’s most trusted advisor.

This title potentially derives from a well-known English phrase of ‘right-hand man’, defined as one’s most valuable assistant or supporter and first recorded in the 17th century. Dating back further, right-hand derives from the Old English rihthand, figurative for ‘indispensable person’ .

Whilst the Hand so far has been relatively dispensable, his role is reminiscent of how many western medieval courts functioned – a small circle of trusted confidants who ran the kingdom while the monarch frolicked.

‘If you do not have a maester, it is taken to mean that you are of little consequence’ – Barbrey Dustin

Martin embellishes his epic saga with words inspired by Old English, and maester is no exception. Pronounced ‘MAY-ster’, it would seem that this word derives from the old English word mæster.

Both mæster and the more modern master can be traced to the Latin magister – a master or a teacher. This title was bestowed in the Middle Ages upon a person of authority, who had obtained a licence to teach from a university.

Not unlike Martin’s maesters, who are scholars from the Citadel that swear allegiance to one of Westeros’s many noble houses and share their wisdom; acting as physicians, tutors and chief advisors.

Milk of the Poppy

Chemistry buffs may have already cracked the inspiration behind every maester’s favourite medicinal drink, milk of the poppy. Milk of the poppy is commonly used as a painkiller or anaesthetic.

This phrase is likely to be related to opium, a powerful drug made from the juice or the sap of a poppy, its use first recorded in the 14th century and deriving from the Greek opion, meaning ‘poppy juice’.

Why milk though, when opium tends to be yellow or dark brown in colour?

Milk of the poppy is commonly described as a white substance, so we’d speculate that this phrase is a play on opium’s moniker ‘the milk of paradise’, referring to its ability to cause deep sleep, hallucinations and addiction. No wonder so many characters are hesitant to consume it.

‘Is it the cold that brings the wights, or the wights that bring the cold?’ – Samwell Tarley

We’ve all come to fear the wights. They’re like zombies, except less hungry for brains and more interested in world domination. The wights form the bulk of the Night King’s army; reanimated corpses intent on destroying humanity. They possess superhuman strength and are deadly with a weapon.

‘Wight’ features in the Collins Dictionary, meaning simply a living being. As an adjective, it means to be strong, brave or valiant; originating from the Latin vincere, to conquer.

Strong? Yes. Valiant? No. Living? Absolutely not, or at least not in the traditional sense. We certainly appreciate the dark humour in this twist on the English language.

Is there any other Game of Thrones terminology you’d like to learn more about? Let us know in the comments.