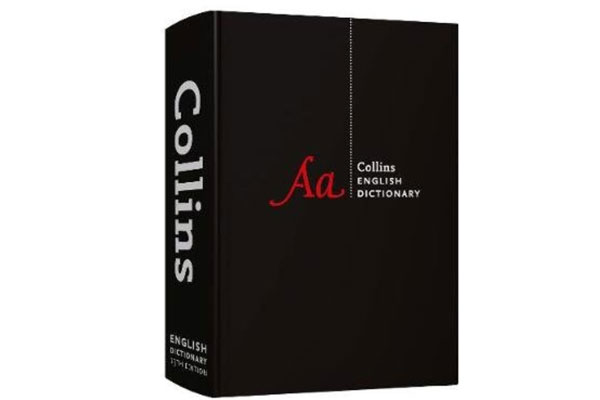 Published on Thursday 23rd October, the Collins English Dictionary, 12th edition is the only dictionary you need – the largest single-volume English dictionary in print with over 50,000 newly added words and a total of 722,000 words, meanings and phrases. With all these additions, and a new design and format, we’ve put together these FAQs to answer all your wordy questions. If you have others, please email us at enquiries@collinsdictionary.com.

Drawn from the Collins Corpus, the largest in the world with more than 4.5 billion words, and combined with a selection of emerging words submitted by the public on collinsdictionary.com, the Collins English Dictionary is a snapshot of real English as it is spoken today around the world.

How many new words are in the new edition?
50,000 – these are newly-added entries, some new, others are rare and literary to appeal to crossword lovers.

How did you fit it all in?
We redesigned the entry layout and reverted to a two-column layout, this allows us to add much more content to help the user.

What new biographies and placenames have you added?
We have updated our biographical content with the likes of Olympians Jessica Ennis and Mo Farah; scientists Sir Gustav Nossal and Brian Cox; writers Ayn Rand and Hilary Mantel.

We have added a few new placenames to increase our coverage of World Heritage sites: Fraser Island (Australia), Ironbridge Gorge. The Somerset Levels also merit an entry, as the area has come to prominence for unfortunate reasons.

How do new words get chosen for the dictionary?
Every word that enters the Collins Dictionary is reviewed by our editors before inclusion. Whether it’s a word that has been floating around the verges of common parlance for years, or one that you’ve just coined and submitted yourself, the word will always go through this review process.

Our editors look for objective evidence to decide which words deserve to be included. This evidence is based on our 4.5-billion-word database of language called the Collins Corpus. The words in the Corpus are taken from a huge range of sources of spoken and written English, including newspapers, radio and now, social media, from all over the world.

Every word has to prove itself worthy of a place in our dictionary. That’s what makes www.collinsdictionary.com so special!

Can I challenge a decision?
We regret that we cannot enter into detailed discussions of why individual suggestions for the dictionary are accepted or rejected. However, to guide you when you make submissions, please note that certain categories of word may not meet our criteria for inclusion.

Which words did you consider but not choose?
digital marketing: we decided this was a deducible compound, the sum of its parts.
American Smooth: a style of ballroom dancing: decided not wide enough evidence of its use (beyond Strictly!)

For this edition Collins has reintroduced many older words previously only published in Scrabble titles, such as bemix (to mix thoroughly), dreamwhile (the duration of a dream), powwaw (an expression of disbelief or contempt).

Who decides which words get in and which don’t?
Our team of lexicographers and language experts analyse which words are most suitable for inclusion. The decisions they make are based on various criteria.

How can I suggest words to go in the dictionary?

You can just visit www.collinsdictionary.com/submission. Sign up and submit.

Why haven’t my new word suggestions been included this time?
Similar to ‘Who decides which words get in and which don’t’. You can improve the chance of your word being included by following these tips:

– When you submit a new word can enter some additional information that might help our editors. Reasons like ‘My friends and I find it funny’ or ‘It would help me win at Scrabble’ won’t impress them. Example sentences and word origins are helpful though.

– Usually, the more times a word has been used, the more likely it is to be included. But if your word is only used by a small group of people, or over a small period of time, the editors are going to need some extra evidence to be convinced. A higher number of overall uses could make your word worthy though, so keep trying!

– It’s a sad fact that sometimes words are removed from the dictionary due to neglect. Don’t blame our editors, but they are constantly working to ensure that the Collins Dictionary reflects current language use. If your word turns out to be a flash-in-the-pan, one-hit-wonder it may not last long. Keep it useful, keep it in use.

How often is the print dictionary revised?
Every 3-5 years.

How often do you update the online dictionary?
Several times per year.

What is special about this latest edition?
It is the largest single-volume English dictionary in print in terms of references, 722,000 words, meanings and phrases, outstripping The Oxford Dictionary of English and The Chambers Dictionary.

Why are old words sometimes removed from the dictionary and how do you decide which to take out and which to leave in?
We usually label old words as ‘obsolete’, ‘archaic’ or ‘old-fashioned’ rather than deleting them entirely.

What is the difference between the online dictionary and the printed version?
Mostly cosmetic layout differences, the content matches for this edition though the online version is updated much more frequently.

Your dictionary is available free online at www.collinsdictionary.com. Why should I buy it in print?
It’s also available as an eBook and an app because we want everyone to have access to the dictionary in whatever way they prefer. We understand that in different situations you might want to use the dictionary in different ways. A print dictionary is much more suitable for explaining a word to children or looking up a word for the crossword, but if you’re at work or on the move the website might suit you best.

What words do people look up most on collinsdictionary.com?
The Top Ten for the English dictionary are:
despicable
condescending
endearing
pretentious
google
kid
ulterior-motive
obnoxious
adorable
diversity

How does a dictionary work on a Kindle?
Each Kindle dictionary has a How to Use and step-by-step guidelines [hyperlink to guide].

What’s the longest word in the dictionary?
dichlorodiphenyltrichloroethane (31 letters) a colourless odourless substance used as an insecticide. It is toxic to animals and is known to accumulate in the tissues. It is now banned in the UK. Abbreviated to DDT.

The longest word not containing the letter ‘e’ is the 21-letter psychopharmacological (relating to the study of drugs that affect the mind). There are six words containing five consecutive vowels; cooeeing, miaouing, miaoued, zoaeae and zoaeas, but no word contains six consecutive vowels.

The words sightscreen and watchstrap both contain six consecutive consonants.

Which entry has most senses? What is the longest entry in the dictionary?

We hope that you have found these FAQs about the new 12th edition of the Collins English Dictionary helpful.