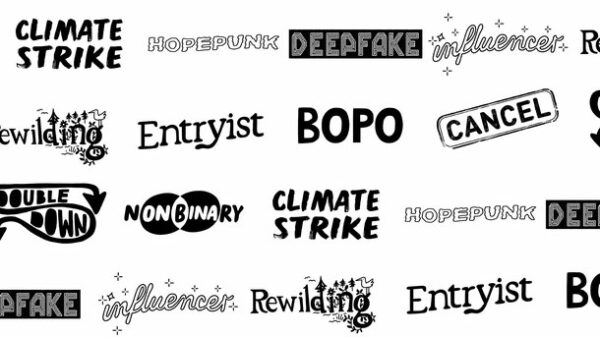 Collins Word of the Year 2019 shortlist

Climate strike has been announced as the Collins Word of the Year 2019.

climate strike (ˈklaɪmɪt ˌstraɪk) noun: a form of protest in which people absent themselves from education or work in order to join demonstrations demanding action to counter climate change

Discover the rest of the words in this year’s shortlist.

bopo (ˈbəʊpəʊ) noun also spelt BoPo: a movement advocating the view that people should be proud of the appearance of their bodies, or any aspect of this, especially size

cancel (ˈkænsəl) verb: to publicly cease to acknowledge a person, organization, etc, esp on social media, in order to express disapproval of their activities or opinions

double down (ˈdʌbəl daʊn) phrasal verb: to reinforce one’s commitment to a venture or idea in spite of opposition or risk

hopepunk (ˈhəʊpˌpʌŋk) noun: a literary and artistic movement that celebrates the pursuit of positive aims in the face of adversity

influencer (ˈɪnflʊənsə) noun: a person who uses social media to promote lifestyle choices, commercial products, etc to his or her followers

nonbinary (ˌnɒnˈbaɪnərɪ) adjective. Also spelt non-binary: relating to a gender or sexual identity that does not conform to the binary categories of male or female, heterosexual or homosexual

rewilding (riːˈwaɪldɪŋ) noun: the practice of returning areas of land to a wild state, including the reintroduction of animal species that are no longer naturally found there