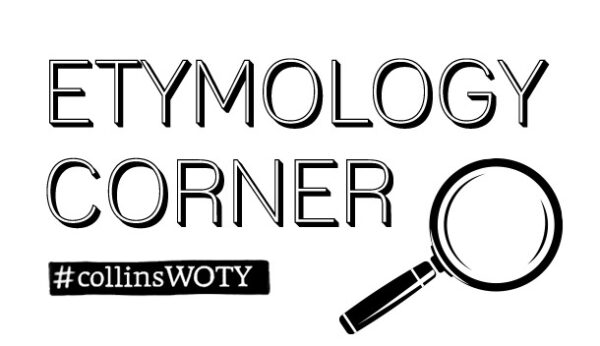 Surely the most significant event in British politics for many years occurred on 23 June 2016 when voters decided that Britain should leave the European Union. Even before departure from the EU became a reality, a new word had been coined to describe the act: Brexit. Brexit was on everyone’s lips in 2016, and we even heard about ‘Brexiteers’ (proponents of the vote to leave) and debated the merits of a ‘hard Brexit’ (complete withdrawal) or a ‘soft Brexit’ (a gradual withdrawal while still preserving close ties).

The roots of the word ‘Brexit’ can be traced to 2012, when the economist Ebrahim Rahbari coined the term ‘Grexit’ as a shorthand for ‘Greek exit’, referring to the possibility that Greece might be forced to leave the euro zone as a result of its economic crisis. The term struck a chord, and when the question arose of other countries leaving the EU, journalists played around with variations on the theme. An article in The Economist later in 2012 coined the term ‘Brixit’, but this failed to catch on and by the following year ‘Brexit’ was starting to emerge as the generally preferred term for a British exit. There was even talk of ‘Swexit’ and ‘Frexit’ amid speculation that Sweden and France might follow Britain’s decision to leave. Meanwhile humorists have come up with some imaginative words that might describe the exit of other member states, including ‘Departugal’, ‘Czechout’, and ‘Finish’. 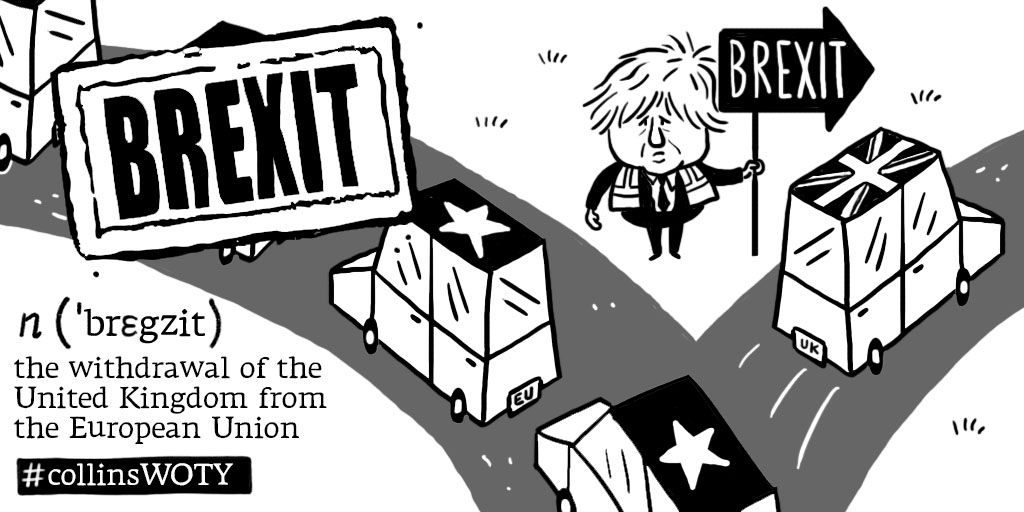 The Danes have established a reputation for being the happiest nation in the world, and so it is natural that other countries should attempt to tap into the source of their happiness by turning their attention to the Danish concept of hygge. This word defies literal translation, but it is perhaps best translated as ‘cosiness’. It comes from the Old Norse word hugga, which means ‘to comfort’ (and which is also the root of the English word ‘hug’), and it involves all things that make you feel warm, comfortable, and loved. Hygge became a lifestyle phenomenon in Britain in 2016: bars and restaurants attempted to replicate the congenial atmosphere of hygge by serving comforting foods in dimly-lit surroundings; meanwhile, numerous books alerted us to the simple joys of eating cake, taking long baths, and spending time with friends.

English is a magpie language, and it has a long history of taking words from other languages to describe ideas borrowed from their cultures (‘sauna’ from Finnish, ‘ombudsman’ from Swedish, and so on). For the moment hygge is still generally regarded as a Danish word, but if the English-speaking world continues to embrace the concept, it could become as indispensable a part of our vocabulary as ‘schadenfreude’ or ‘poppadom’. 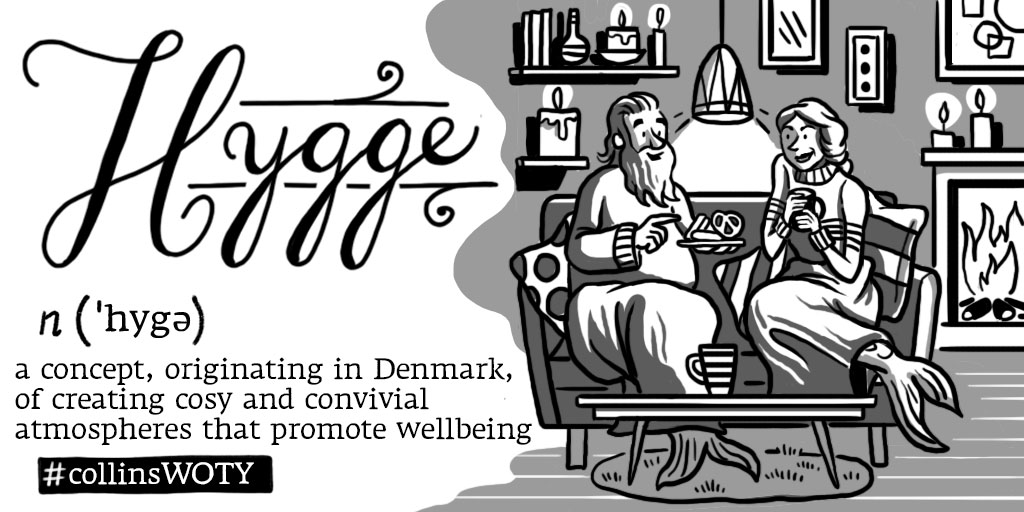 At the end of his final speech to the White House correspondents’ dinner in May 2016, President Barack Obama extended his arm outwards and casually dropped his hand-held microphone to the floor while saying ‘Obama out’. This gesture brought the mic drop to the attention of the world.

To those in the know, however, there was nothing new about the mic drop. In the 1980s American rap artists would drop the microphone at the end of a performance to indicate that they had just made a definitive statement and that nothing more needed to be said. The routine was then adopted by African-American stand-up comedians such as Eddie Murphy and Chris Rock. When Obama became America’s first Black president, satirists played on his heritage and jokingly portrayed him as performing various actions associated with African-American culture, including the mic drop. So when the president finally did perform the gesture at the end of a public speech it was a case of real life imitating fiction. 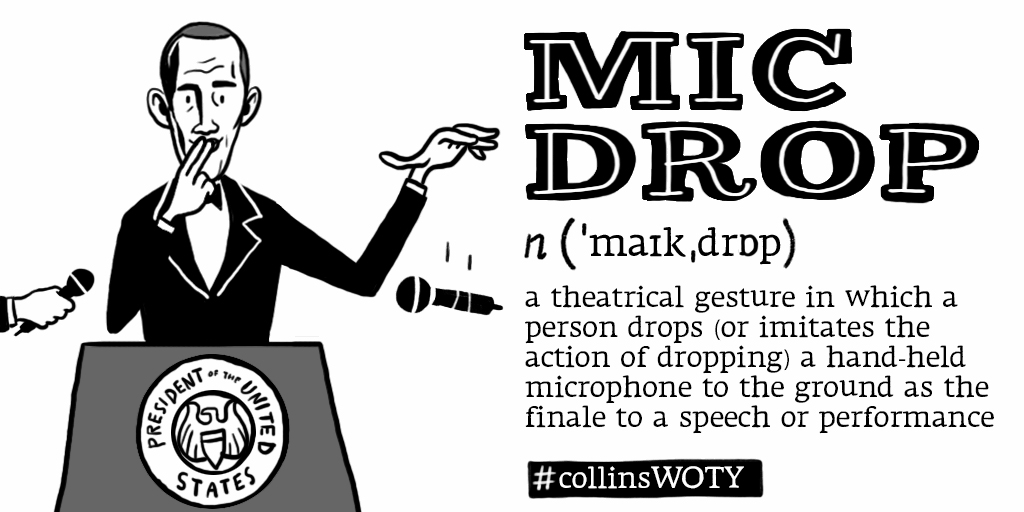 The presidential campaign of Donald Trump has prompted the word Trumpism to be coined in both of these senses. Political philosophers have analysed Trump’s appeal and concluded that ‘Trumpism’ involves a rejection of the current political establishment and the vigorous pursuit of American national interests. To students of language, however, a ‘Trumpism’ would be any of the characteristically outspoken or controversial statements attributed to Donald Trump, which (depending on your point of view) can be held up either as evidence of the man’s ability to make America great again or else as proof of his unfitness to hold the highest political office. 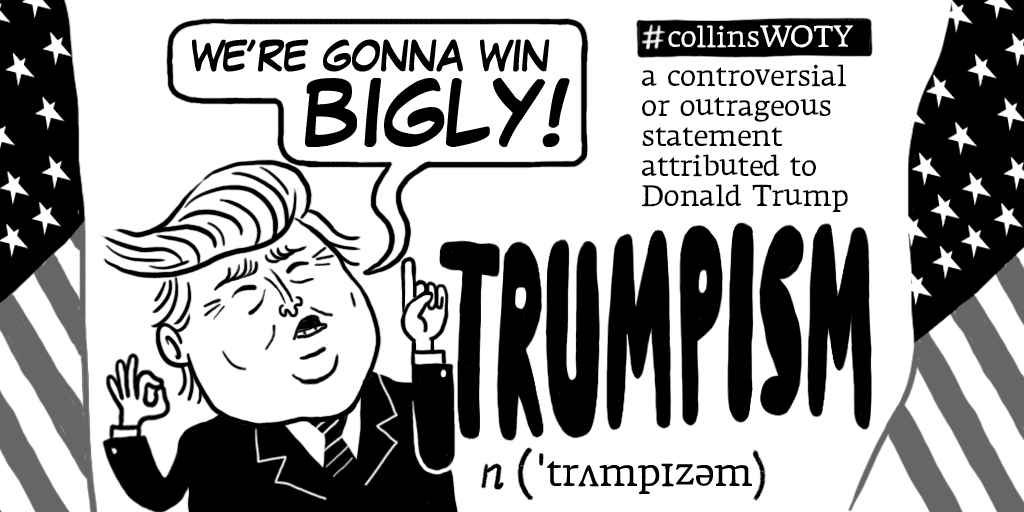 Most of us enjoy a good celebrity spat, especially when it is played out in public. However, the words we use to describe such feuding tend to change over time. During the 1990s it was common to talk of one public figure ‘dissing’ another. A decade later, they might be said to be ‘talking smack’. Today the expression throw shade does a similar job.

This expression first arose in America’s gay community in the 1980s, where a direct insult to another person was known as a ‘read’ (as in the expression ‘read my lips’), whereas a subtler form of denigration was referred to as ‘shade’ (presumably because it was not black and white). It has now come into wider use through a reality television series featuring the drag queen RuPaul. The beauty of throwing shade is that any insult needs to be interpreted by the victim, and the purveyor of the insult can reasonably deny that any offence was intended. However, this distinction is being gradually eroded, and there is certainly nothing very subtle about some of the invective that has recently been described as ‘throw shade’. 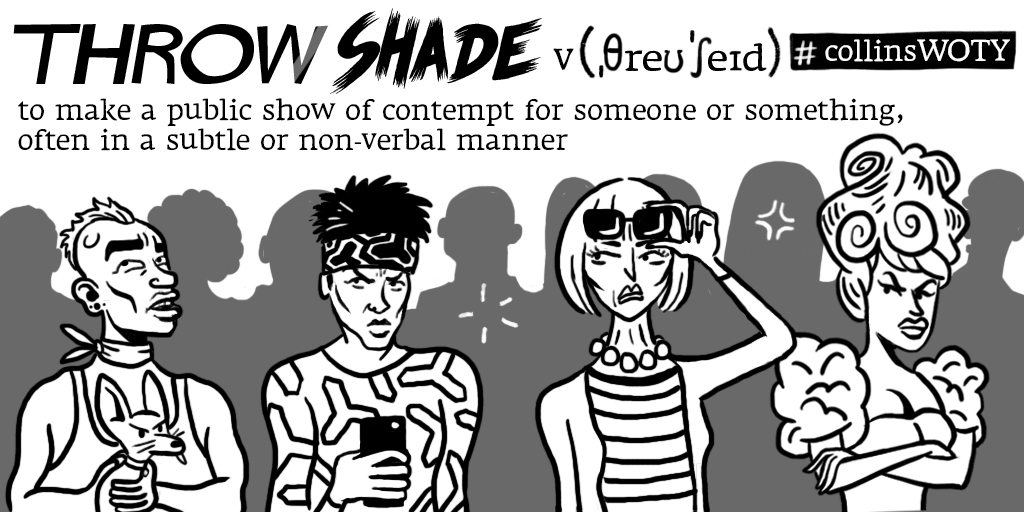