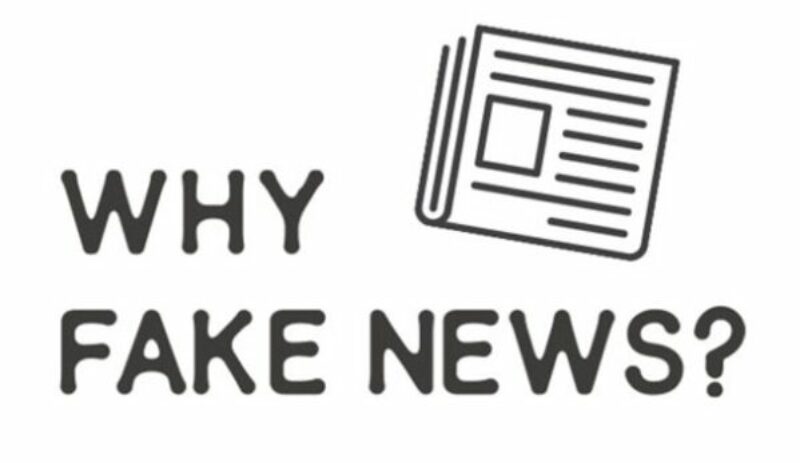 Collins Language has announced the 2017 Word of the Year shortlist, identifying ten words that had emerged or come to prominence during the course of the year. Here we trace the often shadowy origins of five of the words and show how they rose to become prominent in news, politics, business, and society.

The word ‘fake’ was originally used as part of the slang spoken among criminals who wanted to conceal their activities from prying ears. It started out as a verb, and it referred to producing a counterfeit or doctored version of something, such as money or documents. This sense of the word may ultimately come from the Italian verb facciare , meaning ‘to make’, and it probably found its way into English as part of a type of slang called Polari, which borrowed words used between sailors in Mediterranean ports.

The associate of ‘fake’ with ‘news’ started out in the field of comedy, as exemplified by shows such as Jon Stewart’s The Daily Show and Chris Morris’s The Day Today, but around 2005 the term began to be applied to false news stories that were circulated with malicious intent rather than as satire. During the 2016 US presidential campaign pundits noted the large number of websites broadcasting false stories about the candidates under the guise of news. Then in January 2017 Donald Trump dismissed reports from the CNN news agency about his alleged links with Russia as ‘fake news’. Claims that potentially damaging stories were ‘fake news’, and enquiries into the proliferation of such stories were a major part of the news agenda in 2017. 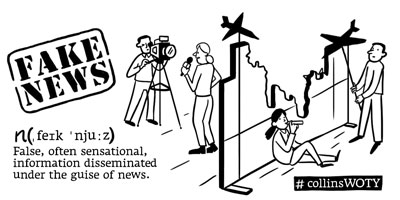 The Book of Ecclesiastes in the Bible tells us that ‘for everything there is a season’. The Collins Dictionary already recognizes such phenomena as the ‘festive season’ and the ‘silly season’, but in 2017 these well established seasons were joined in the English lexicon by the ‘cuffing season’, a rather coarse name for the period when the weather turns cold, the nights are long, and single people long to have a regular partner – at least until the spring, when they may resume the life of a free spirit.

The significance of the word ‘cuffing’ in this expression is that the single person subjects himself or herself to the metaphorical handcuffs of a monogamous relationship, rather like a felon being handcuffed by an officer of the law. 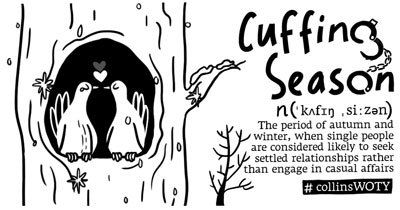 The results of the Brexit referendum and US presidential election in 2016 were both greeted with incredulity in some quarters. Those on the losing side could not understand how their opponents refused to be swayed by apparently reasonable arguments, while the winners remained convinced of the rightness of their own cause. Experts diagnosed that this situation was due to many people living in an ‘echo chamber’, where they only hear the views of people who share and reinforce their own opinions. This is increasingly possible when people form online communities that exclude any voices that challenge or threaten them.

The term ‘echo chamber’ originally referred to a room that scientists constructed to create echoes for use in sound recording or experiments. The idea of an environment where you can hear your own voice repeated back to you made this a perfect metaphor for the world of social media, where many people only talk with those who agree with them, thus creating a rather distorted picture of what the world is really like. 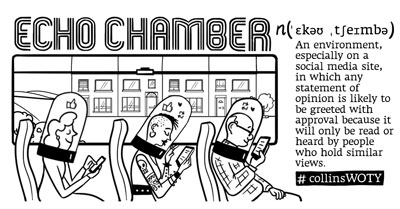 In July 2017 the UK prime minister, Theresa May, made a speech promising to support the increasing number of workers in the ‘gig economy’, where the flexibility of short-term and part-time working comes at the cost of having little job security and none of the employment benefits enjoyed by permanent members of staff.

The expression ‘gig economy’ draws on the use of the word ‘gig’ to refer to an individual job. This sense of the word was first used by American jazz musicians to refer to a single booking or engagement. (Jazz and rock concerts are still widely referred to as ‘gigs’.) The ultimate origin of the term is disputed: it may come from a type of dance called a ‘gigue’ at which musicians would be booked to play, or it may be that the ‘gig’ referred to a carriage on which Black American musicians would play in the early twentieth century because if they played on the street they ran the risk of being arrested for vagrancy. 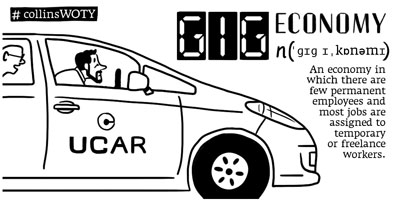 The word ‘unicorn’ is certainly not a new one. It first occurs in English in the thirteenth century, and comes from that the Latin unicornis ‘one-horned’, a combination of the Latin words unus (meaning ‘one’) and cornu (meaning ‘horn’).

What makes ‘unicorn’ rank among the Words of the Year for 2017 is the way the creature has been used this year as a branding tool, especially when done out with glitter and pastel shades. Attempts to cash in on the phenomenon include ‘unicorn toast’ (bread covered in cream cheese jazzed up by psychedelic food colouring and hundreds and thousands), a ‘unicorn body scrub’, and even the ‘unicorn frappuccino’. The success of the unicorn may be due to the creature’s particular appeal to younger female consumers who are attracted to a reassuring childhood image in a world increasingly marked by conflict and division. 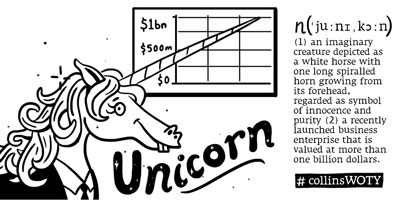 Follow @CollinsDict for updates throughout the day and join the conversation using the hashtag #CollinsWOTY.