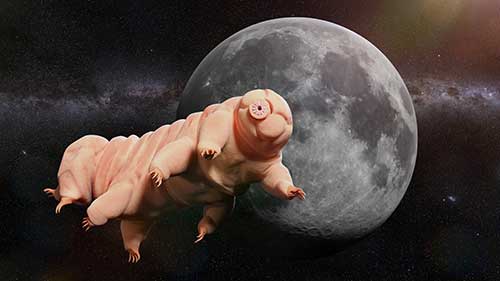 Impossible and Tardigrade : August’s Words in the News

When you write a blog about “Words in the News”, it’s easy to assume the best words will be neologisms: literally, “new words”. But, in truth, the thing that makes my lexicographer’s heart go pitter-patter are new uses for old words. I love it when an established, even common word takes on a new meaning. That’s when you really see the language begin to evolve. For example, silly once meant “religious”!

Is such a change happening with the word impossible? Worldwide fast-food chain Burger King recently unveiled their new meat-free sandwich, the Impossible Whopper, here in the UK. It apparently tastes just like a “real” Whopper. (Please note, I haven’t tried it, so I can neither confirm nor deny this.) Now, this isn’t the first new vegan or vegetarian version of a popular fast food – we all remember the furore over Greggs’ vegan sausage rolls – nor are vegetarian “meat substitutes” a new thing. Soya mince and tofu burgers have been around since I was a kid (and I won’t tell you how long ago that was). What makes this new generation of non-meat creations interesting is that, unlike their predecessors, they attempt to taste like the meat products they replace (and, allegedly, succeed). And, from a lexicography standpoint, this new Whopper may end up influencing the meaning of the word impossible in certain contexts.

This is because, unlike Greggs, Burger King has used a brand-name product from Impossible Foods, who make and sell vegetarian meat substitutes to the restaurant industry. Their signature product is, of course, the Impossible Burger (presumably the main ingredient in the Impossible Whopper), and if these products catch on, it is possible we could start using impossible to mean “a meat-free version of a traditional meat product which is suitable for vegans or vegetarians but still tastes like meat”. This might be to the dismay of Impossible Foods, who could possibly stand to see their brand name fall into the public domain, like Hoover, Linoleum, and Webster before them.

And speaking of things that are impossible, there are earth creatures currently living on the moon.

When trawling the news headlines for vocabulary, I generally do not expect to see words like tardigrade pop up. But apparently a few thousand of these things are stuck on the moon after a spacecraft crashed there earlier this year. In case you don’t know (and most people don’t), a tardigrade is a microscopic organism, less than a millimetre long. Sometimes called a “water bear” (which makes it seem more impressive than it really is), they have been known to be able to survive just about anything. Any temperature, any environment. When there’s no water, they go dormant until the conditions change, then promptly “come back to life” (which means they weren’t really dead in the first place). Apparently, Israel put a few thousand dehydrated water bears on a spacecraft, which subsequently crashed into the moon. If the water bears survived the crash (and there’s no reason to think they haven’t, as they can survive much worse), they’ll be “living” there, waiting patiently for the next visitors to free them. So, the answer to the question Is There Life Beyond Planet Earth is now almost certainly Yes. Because we put it there. Accidentally.