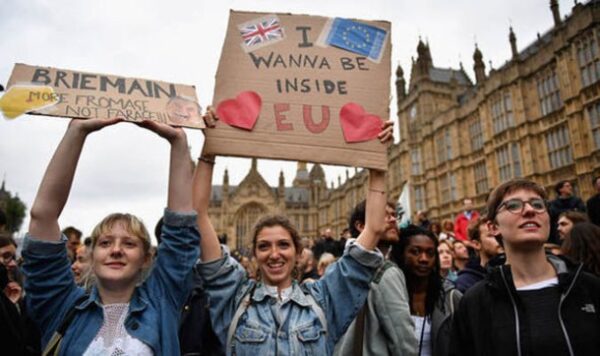 Okay, folks – another blog, another brief round up of the one great bounty Brexit keeps furnishing forth; new coinages. Word coinages, I mean. Not, like, wood chips with Farage’s head on or whatever it is that ultimately replaces the pound when it finally falls so low we are all busted back to bartering goods in the street. Sir Peter Lilley dubbed all those who still feel there might be a few issues with the whole gig that it might be worth running past Parliament “Remoaners”, while others seemed to prefer Bremoaners. For what it’s worth, I feel “Remoaners” represents a more elegant adherence to the principle of Occam’s Razor (that nothing be developed past the point of necessity), to which I cleave as steadfastly in matters etymological as I do in matters culinary (two saucepans is at least one too many. Why not stick to toast?), although clearly my syntactical proclivities still need work. But a tip of the hat to Tweeterer @jburnmurdoch who posted, with both a brevity and insouciance I envy deeply, “Please, it’s Brémoaneurs”. Some people can do so much with so little. Chapeau, monsieur – chapeau.

Apropos absolutely nothing, and certainly not Brexit, because that would be me just pointlessly Remoaning (hmm – that would be better as Bremoaning, wouldn’t it? Otherwise people might think I was just ‘moaning again’. Which I am, but I’m actually Br-remoaning, or re-Bremoaning. You know, leaving the EU has so far not simplified my life AT ALL), I note that jw_research has contributed ignomeasure and quanticomfort. The former is a blend of “ignorance” and “measure”, and refers to quantitative information – £350m per week for the NHS, say – which is relied on as valuable, but which is not fit for purpose due to defective intention, commission, design, implementation, reporting or interpretation. Or all of the above. The latter is a blend of “quantitative” and “comfort” and means relying on a piece of quantitative information simply because it causes psychological comfort due to the presence of a number – £350m per week for the NHS, say – irrespective of whether the information is reliable or defective.

Oh, ignore me. I am just being squabblesome, no doubt. This was submitted by new contributor haochenwang, and means being ready to quarrel over the smallest things. Which is probably not the right mood in which to turn to sundae_rose_hines’ contribution, womany – “things that only females are interested in.” So I shall not. I shall simply say that there is definitely a doctorate to be written on the use of the word “females” instead of “women” by someone, somewhere, though I will give sundae_rose_hines the benefit of the doubt here and suppose that it was done to avoid repetition after “womany”. See how unsquabblesome I can be?!

It’s probably still a word to avoid in most conversations, however, if you are chirpsing, which according to Tommy is what the young people are calling flirting – a brief Google suggests the refinement “with intent”, ie with someone you genuinely find attractive and not just someone you are passing a few desultory minutes with – these days. It sounds nice, but I have been misled by young people before. I refuse to Google more, just in case.