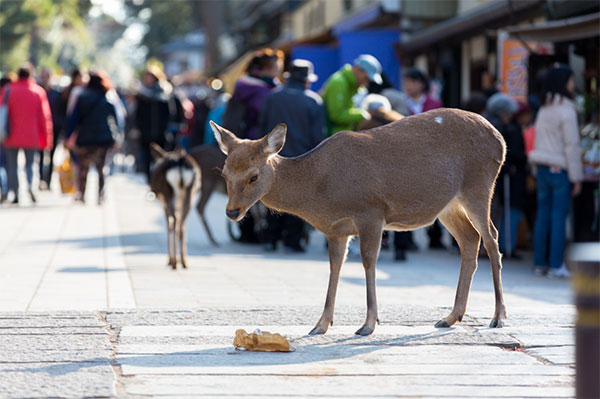 Going back to nature is positive. According to Collins COBUILD dictionary, it means you want to “return to a simpler way of living”, sparked by a wish to revert to that never-never land, to that mythical Eden before the fateful apple was gnawed – or the horseless carriage invented.

But what if the terms are reversed and Nature comes back to us? Thanks to Covid-19 lockdown, urban centres worldwide lack their normal footfall. That desertedness, allegedly, attracts what I’ll call paw-fall or hoof-fall (geddit?) as animals abandon the suburbs. Their incursions are benign, if occasionally alarming, from pumas in Santiago de Chile to sika deer in Japan, wild boar in Bergamo and Berlin, flamingos in Mumbai or the almost legendary Llandudno goats. And their appearance in city centres has proved a heartening talking point in difficult times.

It’s tempting to overegg these infiltrations sentimentally, ecologically, even messianically as Mother Nature reasserting her dominion over the human city. From that perspective, it’s almost as if, say, those Llandudno billies and nannies had a pow-wow: “Hey, guys, them there roads be empty now. Let’s party!” Or, as a Guardian banner had it, “Emboldened wild animals venture into locked-down cities worldwide.” Such anthropomorphic interpretations overlook the imperative behind the incursions – the never-ending search for food – and the effects of encroaching urbanisation.

Take those delightful Bambi clones, the Japanese sika deer that have been wandering the streets and even the underground stations of Nara, the historic Japanese city. They normally live in parks on the outskirts and are fed by tourists coming to “ooh” and “aah”. With visitors confined, the deer venture cityward in search of the missing calories.

Similarly, the Llandudno goats often descend the slopes in winter in search of food: it’s mere coincidence that now they can roam freely along deserted streets.

These are not just any old goats, these are a unique strain of Kashmiri goats, the breed with the luxuriant fleece which supplies the yarn for the coveted knitwear. Behind the crenulate (ridged) horns of the males are glands that exude an aphrodisiac odour which, combined with the urine the billies coat themselves with in the mating season, proves irresistible to nannies. Well, each to their own, I say.

Their deficient personal hygiene did not stop Queen Victoria keeping a flock and presenting one to the Royal Welch Fusiliers as a mascot in 1884. That tradition lives on. The goats are taken from the Llandudno flock and enrolled with a military rank, starting as fusilier. An insubordinate goat lance-corporal was once temporarily demoted back to fusilier for not marching in step on the Queen’s birthday parade.

And what of the word goat? It’s part of the Germanic stock of English, though ultimately related to the same Indo-European root as the Latin haedus, “kid”. And of course, we use kid so often for non-animal young we forget that originally it denoted baby goats, only transferring to children in the sixteenth century.

In fact, the animals named earlier provide a bird’s-eye overview of where English vocabulary comes from. From Germanic, in addition to goat, come deer and boar, the latter specifically from West Germanic. Kid, in contrast, comes from Old Norse kið. That d with a line athwart its ascender is edh, a written character in Old English. Pronounced like th in mother, it was replaced centuries ago by those two letters in English but is still a living letter in Icelandic.

We cross the Atlantic and the Equator on the puma trail. Puma comes from Quechua, the language of the Incas, which has also fed us quinoa. We sail back to the Old World for flamingo, a loanword from Portuguese, which in turn borrowed it from Spanish. There’s a bit of a story here. In Spanish it’s a variant of the word for “Fleming”, a native of Flanders. To Spanish eyes, it seems, Flemings stereotypically had ruddy, sanguine, apple-red-cheeked complexions. Think jolly peasants carousing in Brueghel paintings such as The Peasant Dance and you might see what the Spanish saw.