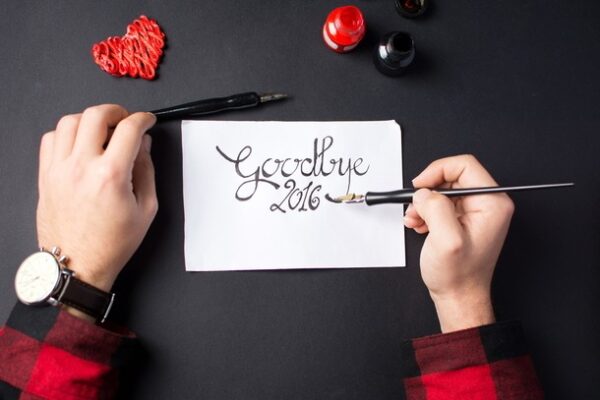 Brexit, Trump, and celebrity deaths: the perfect storm of 2016’s Words in the News

On 28 December 2016, an independent comedy production company called Friend Dog Studios produced a mock-trailer of the year 2016 as a horror film. Though not everyone will agree, 2016 was a pretty bizarre year on the world stage. At the start of it, David Bowie, Prince, Carrie Fisher, Alan Rickman, George Michael, and several other cultural icons were still alive. Barack Obama was likely to be succeeded by Hilary Clinton. And the UK would likely remain in the European Union. Well, so much for all of that.

So, in retrospect, it’s not inappropriate that I began my look at last year’s notable words in the news with perfect storm. This phrase popped up last January when the World Bank warned us of impending economic disaster in the BRICS countries: Brazil, Russia, India, China, and South Africa. Little did we know, 2016 would prove to be a perfect storm in other ways as well.

As the storm began to brew, we saw Feel the Bern enter the headlines and social media posts in February. This was the unofficial slogan of Bernie Sanders’ candidacy for President of the United States, and it introduced one of the three major themes for which 2016 will probably be remembered: the US General Election. While during the primaries it seemed like the recent history of Obama v Clinton was repeating itself, the ultimate outcome would be very different.

A slew of political phrases arriving in late Winter and Spring introduced the year’s second great theme. Project Fear, triple threat, and economic shock were soundbites fired back and forth by opposing sides in the EU Referendum. (The third major theme of 2016, an unusual plethora of celebrity deaths, yielded no new vocabulary, though we did see Brangelina return to the headlines following the “death” of the last of the blended-name celebrity power couples.)

In the end, not even President Obama’s warning that a post-Brexit UK would be in the back of the queue regarding new international trade deals was enough to prevent Britain voting to leave the EU, unleashing a host of terminology and new coinages such as Regrexit, Bregret, Article 50, and, most recently, hard Brexit. Could anything stem this tide of economic dialogue reminiscent of the opening scene of a Star Wars prequel?

Yes, for as no sooner was the EU Referendum lost and won than the world turned its attention back to the US General Election. Bernie was out of the race, replacing Feel the Bern with Hilary Clinton’s hashtag #I’mwithHer, while Donald Trump became the Republican nominee, promising to win bigly.
And win he did, “bigly” or otherwise. But until he did, most people predicted a win for Hilary. Just as with Brexit (and the 2015 UK General Election, for that matter), the polls got it completely wrong. And that was in spite of the usual October Surprise, which this time took the form of the FBI re-opening its investigation into Mrs Clinton’s emails for a week or so.

Indeed, the world was shocked to learn the election result on 9 November 2016. So shocked, in fact, that there was discussion of reforming the Electoral College, and even hints that the College’s Electors might vote for Clinton anyway on 19 December. But they didn’t.

2016 having been the distressing and dispiriting ride it was (at least for many), some people are hoping that 2017 will turn out better. Considering it begins with Trump’s inauguration and a new film in the Transformers series, I’m guessing the answer is no.