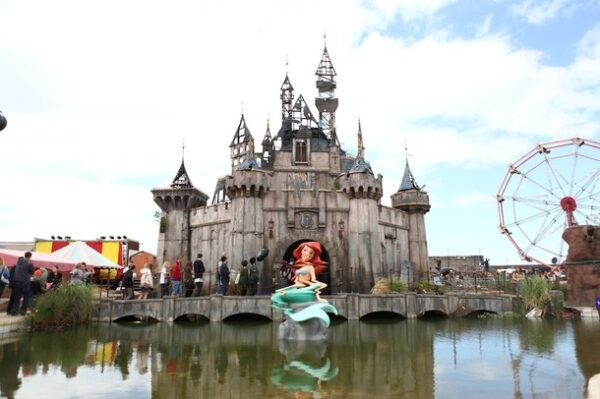 ‘Dismaland’, ‘ring of steel’ and ‘pansexual’: August’s Words in the News

The Summer holidays are over and schools are back in session. For any parents who took their kids to abroad to Paris, Orlando, or California during the past couple months, the Disneyland parks may already seem terrifying beyond belief. The credit card bill certainly will be. But, the elusive artist Banksy has created a more palpable malaise with his dark satire of Disneyland: Dismaland, a “bemusement park” complete with demotivated attendants in high-vis jackets, a poorly functioning website, and tickets sold from the portaloo across from the site. And however you may feel about the real Disney parks, you’d have to agree the twisted exhibits in Dismaland are truly the stuff of nightmares, like a creepypasta come to life.

One of Dismaland’s exhibits depicts children stranded in a boat, a potent symbol of the ongoing Migrant Crisis which has led to a “ring of steel” being erected to secure the UK’s borders. The so-called “ring” is actually a £7m fence at the Eurotunnel entrance, rather than a literal ring around the whole country, so you can still go paddling at your local beach. If you have a valid UK passport.

Meanwhile another political controversy looms with the impending release of the Chilcot Report into the war in Iraq. Last month it emerged that publication has been delayed because persons named in the report are being given a chance to read and respond to the sections which criticize them, a process called Maxwellization (after the newspaper tycoon Robert Maxwell, who, significantly, was not given such a chance when a DTI report ruined his reputation).

A more prosaic word that cropped in the news in August is Alphabet, which, surprisingly, is the new name for Google (the company, not the verb). Last month the technology giant (which, remember, started off as just another search engine), announced it was going to restructure into a new company called “Alphabet” in order to keep its non-mainstream ventures (such as its investment activities, flying cars, and the “smart home” project Nest) separate from its more traditional businesses.

The Google bits of Google (search, ads, earth, maps , etc) are keeping their name, and Android and YouTube will also continue as part of Google, rather than Alphabet. So you don’t have to start “Alphabetting” things or take notes in “Alphabet Keep”.

And lastly, the established term pansexual enjoyed a moment in the spotlight when Miley Cyrus came out as pansexual last month. If you’re wondering what pansexual means – and especially how it differs from being bisexual – to start with it’s non-binary. As terms like LGBTI gain traction, there’s a tendency to view sex, gender, and sexuality as fluid and continuous, rather than just “this or that”. Collins defines pansexuality as “sexual attraction or sexual relations that are not limited by biological sex or gender”. What Miley is presumably saying is that her romantic interests are not limited to any one biological sex or gender identity.