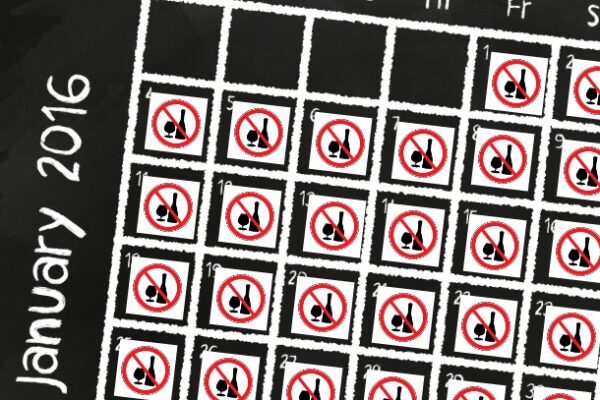 ‘Drynuary’ is nearly over, so what’s next on the word list? Here’s Lucy Mangan with your update…

How are you? Have you survived Dry January? Or ‘Drynuary’, as submitted by Tommy, which if we’d thought of it earlier could have saved us all vital nanoseconds over the last four weeks. When you consider how boring all conversations about dry January are, a nanosecond saved on such discussion is valuable indeed, so I suggest we all tuck it away in our mental files ready for deployment next year. If the drunken reactive spree that February (Inebruary?) will undoubtedly be, does not destroy them all of course.

Tommy also gives us “iHunch”, which is the skeletal deformity we all risk by bending over our smartphones, tablets 24/7 – a bad habit we should probably also have resolved to kick in Head Up, Shoulders Back January, but it’s too late now.

I am delighted beyond the telling of it by a pair of submissions from new contributors andrew_meancock, who gives us “footfingers” – a completely unnecessary and entirely charming alternative to “toes” – and padamahum7 who furnishes forth “spindler”, meaning a partnerless sock, aka the entire contents of my sock drawer.

Another new contributor, airforce1, gives us “clapotis” – the reflection of a travelling surface wave. It’s a hydrodynamics term (though given airforce1’s monicker possibly with application to aero-matters too) and as far as my tiny, entirely undynamic brain can make out, refers to what happens when an incident wave hits a wall, gets bunched up and sent back. But I like it because it is basically French for “lapping of water”, which is pleasing in itself, and also reminds me of “clafoutis.” And the day I am not pleased to be reminded in any context of delicious Gallic puddings is the day you may put me out to pasture, my friends.

Moneill gives us what I can only describe as the absolute antithesis of delicate, delicious – in word and deed – “clafoutis in “oatsotto”; risotto made with oats, basically. What people who perpetrate this kind of thing are calling in restaurants “savoury porridge”, apparently, and are chucking onion and fennel and chestnuts into with gay abandon. Dear God. I haven’t come across anything so unappetising since my sixth form trip to Paris when I saw my first steak tartare. Mince with a raw egg on top. Stick to puddings, France, I thought, a belief to which I have cleaved firmly ever since.

Moneill also submits “Fakebooking”, which he says means editing your Facebook page to present yourself in the best possible light. I thought this was simple Facebooking. “Fakebooking” surely demands a greater degree of fraudulence, the limits of which can only be determined by the boundary at which human invention meets human gullibility.
Thank you all, and keep ‘em coming. See you – if sufficiently sober – next month.