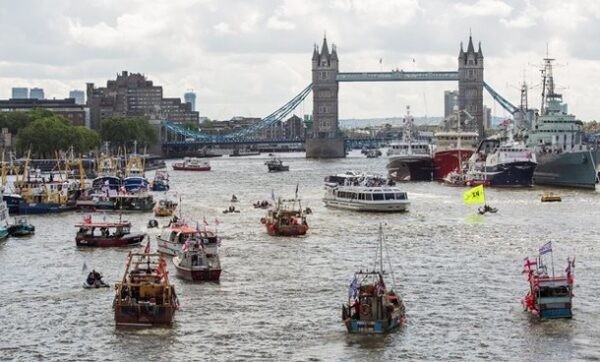 From ‘boggle’ to ‘Michilimackinac’, Lucy Mangan takes a look at your recent word submissions

I am writing this as a flotilla of boats full of men making rude gestures and shouting impenetrable insults at each other (“That dinghy is from Goldman Sachs!” being one we shall have to unpick at leisure once we reach calmer waters) in what they claim is an effort to hammer out this referendum business once and for all. I am way past my boggle threshold, which was submitted by thomas_dreiling just before this buoyant madness began. It is a fairly self-explanatory term that has suddenly come in useful in a way I had never envisaged, and possibly never wanted to either. Democratic government has given way to a boat fight. My boggle threshold is rapidly becoming a dot behind me in the distance.

Maybe I will try to escape the nonsense by moving to Mackinac Island and the region round the Straits of Mackinac between Lake Huron and Lake Michigan whose Odawa name is Michilimackinac, and reason enough alone to go. Imagine how much joy you would feel and how much joy you would spread if you lived there. “Oh, are you leaving?” “Yes, got to get back to Michilimackinac.” “Say it again!” “Michilimackinac!” You’d be dancing together to the door. That is – roughly – how every farewell would go.

Or maybe I stay patriotically put and get lagerised. Or lagered. These were submitted by Brutus9. Well, he actually submitted “langerised – intoxicated or drunk. Same as langered” but I’m sensing a possibility that he himself might have been typing under the influence and have taken the liberty of suggesting an alternative spelling.

Drink, of course, is responsible for a lot of shonkery in this world. “Shonkery = unsound thought or actions”, according to contributor AustinAllegro. I am already a devotee of “shonky” – it sounds so perfectly like what it means. It even sort of LOOKS shonky, doesn’t it? I like “borked” (ruined) for similar reasons. Plus they both sound a little bit sweary, which enables you to relieve your feelings at the same time – so will be happily adding its equally valuable cousin-noun to my working vocab banks. It’s a pity “borkery” doesn’t seem to work nearly as well.

Perhaps I’ll take my mind off things by going to a rager (“a party or gathering” according to contributor Claire) but I just don’t have the energy. I’m too much of a drimp (“a totally ineffectual person” says its provider, Minimus), which is another word I’m adding straight to the working vocab list. “Drimp” sounds even wimpier than “wimp”. Or should that be “drimpier” than “wimp”. I can’t decide. Because I’m a drimp. Possibly even a particularly wimpy one.

Meet me – limply – in a fortnight when we wash up on the shores of Brexit or Bremain when both the country and I shall have reached a conclusion. Until then, sail as steady as you can on this ship of fools we call life.