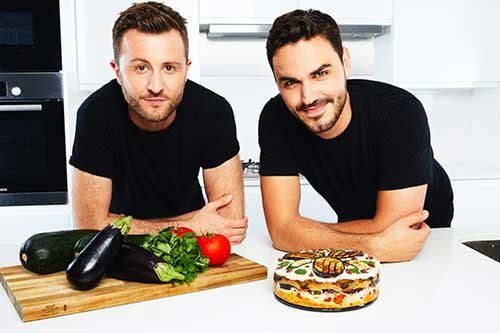 We’re here to show you how you can eat delightful meals that are both easy to cook and incredibly satisfying, all using just plants. Let us introduce you to a new way of thinking about food; one that we’ve developed and perfected together over the last three years, and that is becoming increasingly popular. It involves eating delicious, hearty, even indulgent meals that are both comfortingly familiar and exciting, and without any need for meat or dairy.

It’s also a new way of cooking. Animal products are so ingrained in the human diet that we’ve had tens of thousands of years to hone the art of cooking with them. But the concept of cooking without meat and dairy is still relatively new. Which can only mean one thing: there is so much potential yet to be unleashed from plant-based eating.

If you’d told us three years ago we were going to spend our lives cooking and eating amazing plant-based food, we wouldn’t have believed you. We were a couple of mates from Sheffield who ate meat every single week. Now we run BOSH!, the biggest plant-based online channel in the world. Our food creations were viewed by half a billion people in our first year and our most popular recipe videos have been viewed over 50 million times. We never expected to have that kind of success, and it has been humbling.

‘I was the one to first cut out animal products.’
Ian

‘I mocked Ian when he went vegan, and asked him where he’d get his protein from. But eventually he won me over. That and the whole saving the world by not eating mass-produced animal products thing.’
Henry

After cutting out animal products entirely, both of us felt fantastic. But we had to re-learn how to cook and find food when we were out and about. We also found that the vegan food available in restaurants or in cookbooks was often, frankly, not very good.

We saw an opportunity. Since then, it’s been our life’s mission to show people how to make delicious plant-based meals. However often they choose to do that.

And now, after three years of eating plant-based food, we’ve mastered a new style of cooking, one made popular through a new breed of internet chefs, where novelty and wow-factor presentation are just as important as taste and ease.

With this new style of cooking, we’ve created all-plants versions of classic dishes that are free from meat, eggs and dairy, but still totally scrumptious. You know your favourite dishes, the ones you’ve learned by heart and use again and again? Well, these are your new go-to classics.

Everything we do is aimed at showing just how easy it is to eat more plants. We also want to prove how delicious, hearty and satisfying plant-based food can be.

We cook, drink and film delicious recipes for the world, all from our home studio in East London.